We did it again. The intrepid duo of Longwood Super Vets ventured into the rolling hills of Swaledale yesterday and scored another impressive double in the Richmond Castle 10k. The weather was fantastic, the autumn tints at their glorious best and the field, limited to 500 runners, just big enough for camaraderie and comfort. The organisation, marshalling,

prize-giving, etc. were all top class. And there was even a beer festival going on in the same hall as registration - for those who indulge in such things!
But quite honestly it was the hilliest 10K I've ever run (well, it was sponsored by the Hilly Clothing Company!). Even sixty years ago I'd have found those hills hard. But the crowd support and encouragement kept us running in places where many might otherwise have walked, particularly the last ¼ mile with 150ft of ascent from the river bridge, up tarmac, then cobbles, then grass to the finish in the grounds of Richmond Castle.
However, in the MV70 category I hung on to beat last year's winner, David Whitmore of South Shields Harriers, by around 2 mins to finish 220th from 461 finishers in a time of 50.43. And to make it an even more memorable day my wonderful partner romped home first lady in the LV60 category with a time of 1.01.59. Another good day for the Longwood Harrier Super Vets.
Needless to say, we'd a suitable celebration in the evening!
Full results here

It's nice to see a church full to capacity with standing room only for late-comers, and that happened in our little village of Hebden last Monday (Oct 5th). But it's a shame it's mainly weddings and funerals that attract so many people. Yesterday's occasion was for the funeral of an old running friend of mine, Peter Wilson, of whom I have many fond memories. It was Peter who first introduced me to all the wonderful wild running routes around Hebden some 18 years ago when I became known as 'the new runner in the village'.
I say 'around Hebde 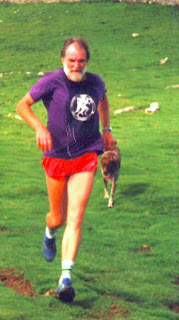 n' but in fact we ran far and wide, over Great Whernside, Simon's Seat, over the border into Nidderdale - anything up to 18 miles - for Peter was a long distance specialist. He'd run the Dales Way, 81 miles of rolling countryside from Ilkley to Windermere pacing his good friend Frank Milner and supported by Guy Goodair. He ran the Three Peaks of Yorkshire (24 miles/4,500ft ascent) on several occasions finishing well up in the field. He squelched his way round the 32 miles of the Haworth Hobble. But his most oft-recounted story was of friendly rivalry with another local runner, John Ely, in the classic Borrowdale Fell race, a favourite route over 17 miles and 6,500ft of beautiful Lakeland terrain.
In training, for important races like the London marathon or Three Peaks, I ran hundreds of miles with Peter in all seasons and all weathers. He was a jocular giant whose wry humour and 6' 4" frame made the going so much easier as I trotted behind him through Mossdale monsoons and Barden blizzards. And towards the end of a run, when he thought I was tiring, he'd say "C'mon you bugger" and set off like a bat out of hell, careering down some long slope with me trailing in his wake. "By 'eck, I enjoyed that" he'd say as he mopped copious sweat from his brow.
After his funeral, his burial in the churchyard, and after a delectable funeral tea in a packed Clarendon, I went for a run in his memory. "This one's for you Peter" I silently intoned as I ran up the cutting in Hebden Ghyll. Strangely, for the words were still in my mind, there came a weird response. Lying in the road was a £5 note. It was as if he were saying "And this is for you, have a drink on me". He was with me in spirit for the rest of the run, through Yarnbury and on past Bare House. And as I ran down the wonderful springy turf towards Grassington at full speed ahead I shouted "C'mon you bugger". And I'm sure he did.
Rest in Peace Peter. You were a great guy.
oldrunningfox. at 10:56 2 comments:
‹
›
Home
View web version