Last fling before the Glorious Twelfth....

Many years ago while in farm service I acquired an old 12-bore shotgun with a kick like a mule. My boss wouldn't allow it in the house or on the premises so I'd to hide it in a hollow oak tree in a nearby field.   Its use was a means of supplementing my meagre income.   The local shopkeeper would pay 4/- for each rabbit I shot.
Years later after leaving the R.A.F. (where I qualified as a Marksman during the Suez crisis) I resumed my shooting activities for very much the same reasons as before.  I was broke and I needed food, so many of my meals came from the land.  Anybody's land.   Folk have jokingly remarked that it was as a poacher I learned to run so fast.  I wasn't shooting for pleasure, only for the pot and only for myself.
Which leads me nicely to something I hate.   The annual slaughter of birds by folk who pay a great deal of money to kill as many as they possibly can.  They call it sport!
On a local estate pheasant and partridge poults are bought in by the thousand each Spring for trigger happy people to blast from the sky later in the year.
. A video was once posted showing clouds of duck flying in to be fed by a chap rattling a bucket.  It was followed later by a photograph showing carcases of those very same ducks spread on the ground before a group of posing, beaming shooters.
They call it sport.  I call it carnage.
Once we had a keeper more sympathetic towards all wildlife.  I could chat with him and could accept grouse shooting and the Glorious Twelfth.  We had a lot in common.  In those days it was a pleasure to run the local moor.  Resident ravens were almost friendly. They'd trail me, knowing they were safe. Hen harriers quartered the moor, merlin would flash by, low along some banking.   We'd frequently hear the mewing of buzzard, catch sight of a peregrine, or occasionally a red kite would stop us in our tracks...….
…...until we got a new keeper whose wealthy foreign landowner was only interested in grouse.  Everything else had to be trapped, shot or quietly poisoned.  Frequently I'd catch my foot in one of the hundreds of snares and be brought down heavily, miles from home.  We'd come across 'stink pits' - heaps of rotting carcasses surrounded by a ring of snares to trap unwary foxes. Once trapped their corpses would be added to the disgusting pile.  I've even come across an illegal gin trap and heard rumours of dogs being poisoned.  Every year we hear of raptors being shot or poisoned in various parts of the country.
The B.A.S.C. would have us believe otherwise, claiming shooting activities are all above board and in the interest of conservation.  For someone who never swears, all I can say is bollocks. 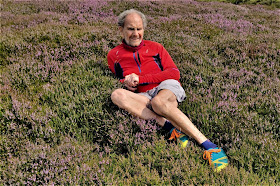 Good weather last weekend presented us with an opportunity to walk/run the moors prior to the 'glorious twelfth'.  On our way up it seemed curlews, lapwings, redshank and oyster catchers have all departed, back to their winter quarters.  It was eerily quiet.  Already! 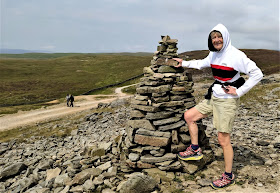 Higher up, heather was in full bloom but there was a stiff breeze that rather killed its sweet smell.  Even when we lay in it.    My wonderful partner would have nothing of the 'stiff breeze' saying it was more a full blown gale.  On reaching the high point at 1,500ft she turned her hood up! 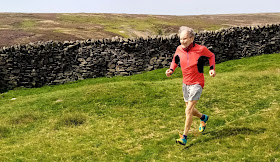 We returned by the 'long wall', one of three measured miles I ran in marathon training days.  Thirty years ago I'd easily run each one sub 6 minutes.  Nowadays it takes rather longer!

I can't skip over the grassy tussocks and rocky slopes as I used to do.  Now, my wonderful partner probably copes better than me. We'd a wonderful weekend but it was nice to get home and relax with a nice glass of wine before the slaughtering guns take over the moor
oldrunningfox. at 16:39