Shortly after the Chernobyl disaster in 1986 I was climbing in the Lake District with members of the Vibram Mountaineering Club.  No-one knows quite how it came about, I suspect beer was involved, a handful of us talked each other into doing a 5 mile Fun Run 6 weeks hence.  I'd never run in my life, my passion was climbing, being among mountains.
﻿
To be honest, I didn't take it seriously.  It was just something different to do, a one off diversion.  Nothing could replace my love of mountaineering, summer and winter, snow or shine.
﻿

In fact, that 'poxy little Fun Run', as someone called it, proved to be the dawn of my running career.  I surprised myself by finishing the hilly 5 miles in 38 minutes with two thirds of the field behind me.  At the age of 55.  Time to do some serious training, I thought, so joined a jogging class at Huddersfield Sports Centre.

The class was led by Alan Taylor, a very good marathon runner who very soon told me I was fast enough to start racing.  I suspected it was because he was a man short for the Cross Keys Relay team!   The Mountain Goat, as I was infamously called, was given a 2½ mile fell section to run.  We won and came away with a large silver cup, a Shield and a car boot full of canned beer.
That win sparked a whole series of races and within another few months had a 10K time of 42.34, 10 miles in 68.34 and a ½ marathon time of 85.33    The annoying thing was, I hadn't actually won anything.
After just 15 months of running I struck luchy in the 1987 Pennine Marathon which seasoned runners told me had around 2,000ft of ascent in its 26.2 mile circuit.  It took place on a blistering July day and many runners fell by the wayside suffering from cramp, hear exhaustion, dehydration or blisters.   Crossing the line in 3.30.04 I was declared winner of the M55 category and called onto the rostrum amid great applause to be handed a silver cup, voucher for £25 and large green bath towel which has since graced many a club changing room during races up and down the country.  The mountain goat had graduated.
Life would never be the same again.
I'd become an athlete and from then on I'd have to train, act and behave like one.   Social habits, diet and drinking,, sleep times all changed.   I set myself two goals, to one day win my age category in the Three Peaks of Yorkshire, which became my all time favourite race, and to get my marathon time down to sub 3 hours.   In 1993 I achieved both on consecutive Sundays.
Unbelievably, just seven days apart!

My friend, Ajit Singh, had insisted I run London with him.  "It's the best marathon in the world, like a world championship and you'll beat them all" he said, meaning all the M60's category.  We stayed with wonderful Sikh friends of his at Dagenham East on Saturday night, then got the train to Blackheath early Sunday morning and lined up with Good For Age Veterans in the Red start.
﻿
I was only a few yards from the front and ran the first mile in 6 minutes before settling down to my race pace.   Ajit was right, I did beat them all, taking the British Championship and, I was told, finished 2nd fastest O/60 in the world that year.
Ajit was over the moon

The Three Peaks was a different kettle of fish, 24 miles of heather, bog, rocks and stony trails with nearly 5,000ft of ascent over Penyghent, Whernside and Ingleborough.  Friends said I was mad to attempt it only seven days after London, but I was fit and brimming with confidence.   After a couple of easy training runs on the fells I was rarin' to go.
My legs felt no after effects of London and I ran the Peaks like a well oiled machine to easily finish first O/60 in 4.09.27.  So far as I know, no other athlete has completed that double before and I doubt if anyone will.  I ran London twice, the Pennine marathon five times and the Yorkshire three Peaks three times, winning my age category in all of them.
Of all my racing trophies the Peaks medals come top of the list along with one Presented to me after winning the inaugural men's O/70 English Fell Running Championship in 2004.  The London medals were absolute crap.   They weren't even engraved but came with a brief letter from Alan Storey saying what I'd achieved.   I was disgusted, especially as it was the most expensive race i'd ever entered.

In 1991 I met my wonderful partner and persuaded her to join Longwood Harriers.  Becoming known as the Longwood raiding party we ran, and won, many races from 4 miles to ½ marathon both on the road and on the fells, in Britain and abroad.
﻿﻿
Wherever we went, our running gear went with us.  We ran wonderful trails or climbed together both home and abroad, in Crete, La Palma, Tenerife, Gran Canaria, Menorca and the Swiss Alps.  Hot favourites were the Eiger Trail and the run back to Grindelwald from Kleine Scheidegg, the Volcano Route, or the rocky run down from the 8,000ft Rocque de los Muchachos in the mountainous island of La Palma.   In Tenerife we ran up Mount Teide, Spain's highest mountain, but thankfully weren't allowed on the very top.  I was knackered and hyper ventilating!   10,000ft is my limit.
For all those exotic places, her favourite place on earth is the tiny island of Ulva in the Inner Hebrides!
She was with me to run/walk my last 26 Munros (283 Scottish Mountains over 3,000ft) during the fortnight straddling my 70th birthday.  We camped wild with the persistent call of cuckoos.  White hares ran the snowy tops adding interest to our long walks and climbs.   It was a delectable fortnight and I couldn't have wished for better company.
Not just because she did the cooking! 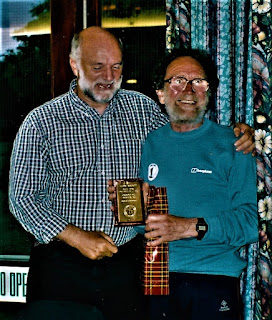 Cameron McNeish presenting me with trophies for ten unaided crossings of Scotland.
Park Hotel, Montrose.
She also accompanied me on three of eleven Coast to Coast backpacking walks across the wilder parts of Scotland, (Grest Outdoor Challenges) that take place every May.
We are the music makers
and we are the dreamers of dreams.
Wandering by lone sea breakers
and sitting by desolate streams. 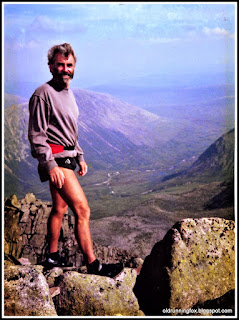 Dr Stuart Scott on Angels Peak during our 38 mile run round Cairngorm tops
Another great running and mountaineering partner was Dr Stuart Scott who lectured at Plymouth University and with whom I did my longest runs.  A memorable Scottish one took us over snow covered mountains from Lairig Leacach bothy, taking in all the Munros of the Great Lochaber Traverse and over Ben Nevis before a joyous 4,00ft run down packed snow fields and the rocky path to Fort William.
An experience I shall never forget.

He was with me over many Munros and I was glad of his company and navigational skills in wild winter weather.  He loved the mountains as much as me and together we could travel at speed over the roughest terrain often wearing only shorts, studs and a bum bag.

"Gear shops wont make much money out of you two" passers by remarked as we raced over Arkle.  He's now happily married to a charming Dutch lady but has fallen out with bonnie Scotland, ostensibly because of ticks, midges and unpredictable  weather, and now spends holidays getting high in Italy.   I've missed him.

Sadly, all such things come to an end.  After more than 40,000 miles of running it's time to relax and indulge myself in all the  incredible memories, and maybe a glass or two of wine.  Looking back, I cannot believe what I've achieved.   I watch runners completing the Peaks with tears in my eyes, wondering how on earth I did it at my time of life.
The wild moors and high mountains are timeless, you don't venture there for fast times but for long days of pure enjoyment.   Kilian Jornet once said "If you don't enjoy what you're doing, you will never improve".  Well, believe me, I've enjoyed every minute of it, lived my dreams, and can say without hesitation,
Vixi, I have lived
Joy Of Living
oldrunningfox. at 17:34