At 77 years old there are increasingly more times when I want to forget I'm a racing animal. When, for a few days at least, I can disregard the fact each run should have a specific purpose with a mix of tem

pos, intervals, hill reps, etc., and simply run for the sheer joy of it. I was able to do just that over the New Year period in the delightful surroundings of Balcary Bay on the Scottish side of the Solway Firth.
Unlike in the Cairngorms, where friends of mine were wallowing in deep drifts, there was very little snow in the south west but a severe frost had turned the landscape iron hard. Grasses and plants were a uniform rime grey, brittle and crunchy. Nearby Loch Mackie was a veritable skating rink so its resident swans had abandoned it in favour of sea water shallows.

My morning runs began along a path that started immediately opposite our cottage door. A notice proclaimed 'Dangerous cliffs' so, of course, that's where I ran. In Spring they're adorned with a myriad flowers and resound to cries of nesting sea birds. In winter they're stark and wind blasted and the rutted earth of the zig-zag path teetering along the edge of the cliffs will do its best to trip unwary travellers and toss them into the sea. I galloped on whilst a family of intimidated walkers squeezed through the fence to the safety of an adjacent field, well away from vertical drops and crashing waves below.
As is well known, fell runners delight in such an environment, with its slight tinge of danger, especially when the early morning sun is gilding the eastern horizon and huge skeins of geese are filling the sharp air with wild bugling en route to their feeding grounds. Curlews were calling too, a coastal bird in winter but one that heralds the arrival of Spring when we welcome it to our Dales pastures in early March. Gorse was beginning to flower and among it in a sheltered hollow was a soft

murmuring of Skylarks, not a full blown soaring song but a softer jerky rendering, probably moaning to each other about how cold it was!
Twelve shaggy coated horses galloped off and formed a staring group some distance away on the first occasion I trotted through their field. On the second day they came and nuzzled me as I tried to photograph them. I was amazed how rapidly I'd changed from being a threat to an object with entertainment valu 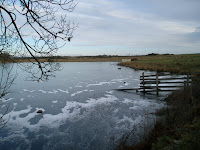 e! On another day two wee terriers were having the time of their lives chasing sticks, thrown by their master, across the frozen surface of the loch - until they saw me and unanimously decided upon a different game! But I like dogs and, with few exceptions, most of them sense this and soon become waggy tailed friends.
Such was my New Year activity, re-charging my spiritual batteries in such a beautiful landscape while gently running off the festive excesses.