Back to magnificent Menorca......

We've just had another glorious holiday in one of our favourite corners of the planet, the beautiful island of Menorca, but we almost didn't make it. The week before we were due to fly I'd gone into hospital for a biopsy and the bl--dy doctors wouldn't let me out.  They wanted to cut a hole in my side and stick a cathether through, presumably with a tap on it, to enable me to pass water from my bunged up kidney.  I refused to let them.  A 'bag' was mentioned too.  They could get lost!  I'd look well running or swimming with such impedimenta trailing beside me.    After four sleepless nights, due to constant noise and glaring lights, I was knackered.
"If you don't let me out tomorrow, I'll discharge myself" I told them.
Reluctantly, they allowed me home next morning, four days before our holiday was due to begin.

Check-ins and flights both in and out were OK but we'd the usual long wait for our baggage at Manchester on return.
As on previous occasions we stayed at 'The Xuroy', a wonderfully situated hotel that sits with its feet in the water and gives access to the Cami de Cavalls (the way of horses), a well marked trail that goes all round the island.

After a pre-breakfast run to the Tower and back on our second day we took the bus to Sant Louis to watch the festival of horses.

Tons of sand are spread on the street where the action takes place to make it safer for the rearing horses.

In the limited space in front of the band-stand, where all the dignitaries sit, crowds of people gather, some of them to tap the wheeling steeds as they rear into the air.

It's a dangerous game and we heard one or two ambulances tearing through the streets.  I wasn't trying to 'prove' myself but still got a knock from one of the horses, but nothing serious.

We returned to our hotel for lunch before going down to the pool for a gentle swim to cool off from the scorching 86º heat.

We ran to Rafalet Vell in search of wild tortoises but saw nary a one.  What we did see was the group of feral cats which were a little tamer this year than last time we came across them.
Some kind person feeds them every day and they all look in tip top condition.

On another day we embarked on a five mile run incorporating a wild swim at Cala Rafalet.

It's a rocky inlet of deep water between high cliffs and we got there just as the sun was rising at the entrance between the rocks.  Magic.

We ran back to our hotel via S'Algar where sunbathers were just beginning to emerge.  Our breakfast wasn't untill 8.30
After breakfast we got into the habit of visiting the bakery at S'Algar, mainly for bread, but also to enjoy a cappuccino before walking the mile back to our hotel.
All our runs were pre-breakfast so we were treated to some dramatic skies as we ran West or North along the Cami de Cavalls.
Wherever we ran, it was rough going and we'd to be extremely careful not to trip up..
Remarkably, with my failing eyesight, I never had a fall.
My wonderful partner visited Mahon alone one day, mainly to look around the 'Oliver House' which was open to the public. 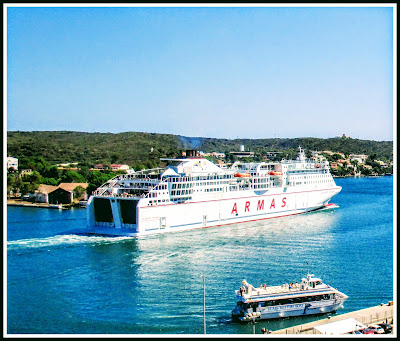 The Inter Island ferry was in the harbour 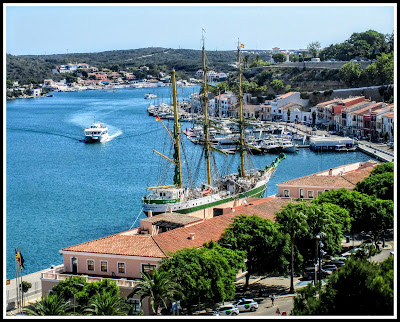 So was a three masted sailing ship.
We'd a walk round the nature reserve at Es Grau one day but all the natural phenomena seemed to be hiding, or sheltering from the heat. 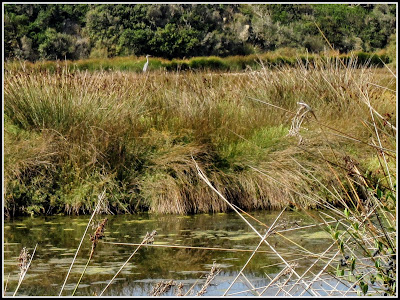 No tortoise or raptors, but some big fish in the lake and a heron on the lookout for smaller ones.
We were rather upset to find that 'Happy Hour' on the terrace, which always began at the beginning of September has been moved to October!  Who the hell goes in October?
But we still went down at the appointed hour to enjoy the view and the ambience.
Traditionally, on our last day we'd a relaxed lunch at the fine Piccolo Mundo restaurant to round off our holiday.  Hours later we were flying home
It was another wonderful holiday.  Doctors can cut and zap me as much as they want now - so long as they get me running again.
But it could be a while.
Posted by oldrunningfox. at 20:28 16 comments: