Stepping up - and up

With the Lowther Trail only three weeks away it occurred to me I haven't done much in the way of training for the up and down bits of it. OK, I managed the Burn Valley ½ marathon without too much hassle a couple of weeks back but that was mainly on tarmac. The Lowther is more of a fell race so I reckon I ought to polish up on my hill work. For 10K's I train over longer distances, for 800 metres I train at a faster 200 metre pace, so for Lowther's 1500ft of ascent I ought to be climbing in excess of that.
With this in mind I set off from Hebden on Saturday along a route I haven't done for years, and very pleasant it was. The first four miles along the road past Burnsall, on through Appletreewick to Howgill were reasonably flat. But towering ahead of me, inky black against the lowering sky, was my intended destination, Simon's Seat. There's an awkward little bit up a wall side through a plantation that was no problem fifteen years ago. I could jog all the way up. This time, rather ignominiously, I found myself reduced to a hard hands-on-knees walk. Fortunately it didn't last long and I was soon back on a good track and heading upwards at a steady pace. "Nice day" I said to a 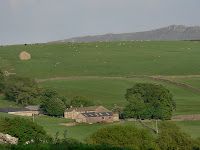 lone walker I passed plodding towards the cairn. I'd hardly got the words out when we were hit by a heavy shower. That'll teach me to keep my big mouth shut! Since conservation work took place on the path leading off Simon's Seat towards Dale Head, nature seems to have taken a hand. The huge boulders that originally formed nice level steps have now settled at some very jaunty angles that call for a considerable amount of care when descending. Beyond, over the next stile, the rough path was pouring with water after the previous day's deluge. I cut across fields to Skyeholme and up the delightful Troller's Ghyll, singing a Leona Lewis song as I went, but hoping no-one was listening. The dulcet tones faded on reaching the steep exit path at the top but re-commenced as I jogged happily down Appletreewick Pasture, the local cows and their calves looking somewhat bemused:
Light up, light up
As if you have a choice
Even if you cannot hear my voice
I'll be right beside you dear,
Louder, louder,
and we'll run for our lives......
........and I was certainly enjoying life on the run as I reeled off the miles back along the riverbank to Hebden.
The only trouble was, I hadn't informed my partner where I was going. I'd passed her half a mile into my run and she believed I was doing quite a short route that would get me home in time to get the kettle on ready for a cup of tea when she got home shortly afterwards. Wrong. She was home long before me and soon started to panic in case I'd had one of my regular 'splats' and was lying injured somewhere. After half an hour or so she decided to get out the car and start searching for me. She was mighty relieved to find me trotting happily back into the village having run 'halfway round the world', as she put it!
My Garmin registered 3,223ft of ascent, so that's the up and down bit of the Lowther training in the bag. To try and generate a bit of speed (ha-ha, that'll be the day) I've sent off an entry form for the Harrogate 10K race next weekend. Watch this space!
Picture shows Simon's Seat in the distance, taken from Hebden.