Lowther, Lowther, and we'll run for our lives.....

Gosh, that was a hard race for geriatrics, but enjoyable in a masochistic sort of way. After a cosy night at Ravencragg on the shores of Ullswater it was but a short drive through Celleron and Askham to the start of the race with its gaunt backdrop of Lowther Castle. Although we'd run this race before my wonderful partner had been worrying about this race for days (and nights) on end, ever since she'd read about them revamping the route to cut out a lot of the tarmac and include some rougher terrain, a river crossing and a 600ft climb to make it more interesting. She's very wary of that word 'interesting'.
In the race pre-amble those with dogs were told to keep them strictly on leads and not to interfere with other runners - to which one of the well trained dogs duly barked its acknowledgement. At 12 noon we were off to a flying start down a bumpy field where I twice turned my ankle before limping out onto the short tarmac strip through the village of Askham. Fortunately, 600mg of Ibuprofen I'd taken beforehand kept the offending appendage numbed for the next six hours. It seemed an awful long way to the first checkpoint on Heughscar Hill, reached in 31.47, punctuated by one of my regular 'splats' where I picked up various handicaps like gravel in the palm of my hand, half a cowpat on my knee and mud in my beard. My partner says I'm hardly fit to be let loose in the hills any more, and I'm beginning to believe her.
It was a wonderful run down to the Cockpit and on to the first drinks station where, for the first time in my life, I washed down one of those sticky gel things. Then it was into the bogs, getting our feet wet as we followed the profusion of red and white tapes through the otherwise trackless terrain towards the cheering people of Butterwick. One of the obstacles my partner was dreading, the wide crossing of the River Lowther, was quite a tame affair really, the water being placid and little more than knee deep. I expected a bit more fight from a Lakeland river!
Back on terra firma I glanced ahead to see tiny figures, way ahead of me, zig-zagging up through the bracken onto the heady heights of Knipe Scar. After 9 miles of hard running a 600ft climb was just what my ancient legs didn't want. But I was inspired by the fact that a chap in a blue vest, who I thought was Peter Taylor of Cumberland Fell Runners, my closest rival, outright winner of the very first Lowther race, and who'd galloped past me somewhere near the Cockpit, was slowly coming back to me. Softly, softly, I reeled him in and managed to put a good chunk of daylight between us before the next checkpoint (reac 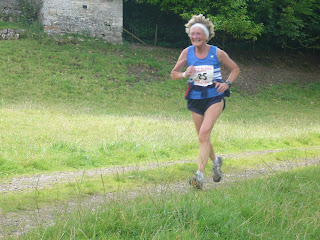 hed in 1.32) at the SE end of the Scar. It's a good job I did. In the last mile and a half the dreaded cramps started to set in, first in my Rt groin, then in the left. The purpose of the painkiller I took prior to the race was to hopefully ward off such discomforts. It didn't work!
I forced down a Mini Mars Bar while walking and stretching before easing back into a gentle run. I crossed the Finish line in 2.06.27 to win the MV70 race, five minutes ahead of my rival. My wonderful partner battled round to take the LV60 prize in 2.35.16 and make it a notable double for the Longwood Harrier Super Vets. We were both awarded Cumbria Crystal glassware and useful vouchers. So there was cause for celebration, a gradely meal and a nice bottle of wine when we arrived back at Ravencragg, tired, but very happy. It later transpired, according to Hayfella, that after major redesigning of the route the total ascent is now in the region of 2,300ft as opposed to the 1,500ft published in the FRA Calendar.
PS. Apologies to Leona Lewis for distorting the words of her song, 'Run', in the title of this piece.
PPS: I must try to stop thinking about Leona Lewis!
Posted by oldrunningfox. at 13:29