Running high in the Swiss Alps

We're back, after a wonderful two weeks of good weather, good walking and scrambling - and even a day or two of good running. It was 29ºC when we arrived in Geneva but a tad cooler as we rose a couple of thousand feet to our first camp at Grindelwald in the Bernese Oberland. A sign said 'Campsite Full' but it was night-time so we sneaked in anyway and put up the tent in our usual spot in the shadow of the Eiger while everyone slept. Around 2am something smashed into the side of the tent, hitting me, jolting me awake and putting a hole in my forehead. A huge dog fox was silhouetted against the light outside. Was this some special greeting for Old Runningfox? Or a warning to stay out of his territory? During our stay we heard several foxes calling throughout the brilliant starlit nights.
When we arose in the morning quite a few people were in the process of packing up to leave, so we didn't really feel guilty about having sneaked in. We signed the book and planned our itinery. The Eiger Trail was one of the highlights of our five days in Grindelwald. The blurb said 'For well equipped and experienced mountain walkers' and there were plenty of these in evid 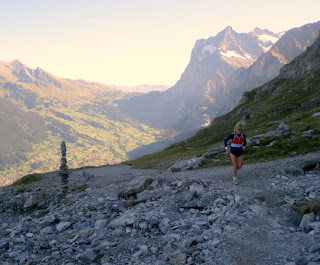 ence leaving the train at Alpiglen, attired in expensive clothing, with bulging rucksacks, boots and trekking poles for the 2,000ft of rocky ascent under the north wall of the Eiger as far as the Eigergletscher. With 140 years between the two of us we didn't know whether to feel chuffed or embarrassed as we tootled past them in our shorts, running vests and trail shoes! After a brief rest by the glacier we trotted down to Kleine Schiedegg, zig-zagging our way through hoardes of spellbound tourists gazing towards the shining triptych of Eiger, Monch and Jungfrau, before jogging gently back to our base in Grindelwald. We showered, had a late lunch and spent the rest of the day basking in glorious sunshine. It might seem strange to some but, old as we are, we prefer such activities to lounging around on beaches!
Of course, we did other things from Grindelwald, like walking the high level route from Schynige Platte (an Alpine botanical garden with around 600 different species) amidst breathtaking panorama, then over the Faulhorn and down past the Bachalpsee to the Gondola station at First. And we plodded our 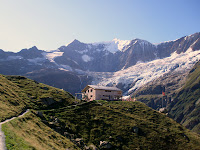 way up to the Baregg hutte, built to replace the old Stieregg hutte which was demolished in a landslide, for a most enjoyable lunch of tagesouppe mit brot. On our way down we passed an elderly grey haired gentleman in a collapsed state who'd had a nasty fall on a rocky part of the trail and badly gashed his head. Other walkers were attending to him, mopping up the blood and trying to stop the bleeding, but we felt quite embarrassed as neither of us had any first aid. With such confidence in our own mountain goat abilities we'd never bothered to carry such things. We do now. That sight taught us a lesson.
Oh, and I seem to recall we did another run before leaving Grindelwald, just a short affair after the rain cleared one day, but around a thousand feet of ascent!
Then we moved to Kandersteg, another favourite haunt of ours with a variety of exciting walks we never tire of repeating. Instead of carrying food we often climb to one of the Swiss Alpine Club huts 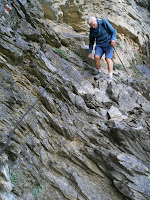 in the area to enjoy an al fresco meal, or a mug of hot chocolate. Among our favourites are the Doldenhorn Hutte (1915m), the Frundenhorn Hutte (2562m) and the Blumlisalp Hutte (2778m). As we set off to the Doldenhorn hutte we met a man of 87 years old, Dave Williams of Derby, who'd never been there and asked if he might go with us. We'd no idea of his capabilities or whether he could manage over 2,000ft of rough ascent that involved a cable assisted scramble at one point. We reluctantly agreed and the chap was absolutely amazing. OK, he rested a couple of times on seats placed at intended viewpoints, but he hardly got out of breath in spite of a constant stream of chatter relating his life history. Then lo and behold if he didn't try chatting up the charming young girl in charge of the hut, who'd served our meal, and insisted on having his photograph taken with her! 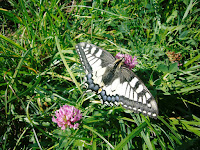 I've no idea how many thousands of feet we climbed during our eight days at Kandersteg. The sky was mainly cloudless and I was jolly glad I remembered to take my sun glasses. Marmots screamed their disapproval as we intruded into their territory, Alpine Choughs formed little black clouds against the intense blue, Steinboks lounged in the sun high above the Oeschinensee, para-gliders sailed back and forth under their multi-coloured canopies, cows, sheep and goats jangled their bells as they munched their way through alpine meadows, deep purple gentians and pale astrantias dotted our various routes whilst a myriad butterflies of yellow, blue and almost black were our constant com 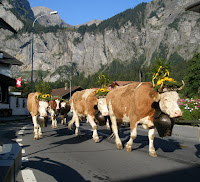 panions but too frenetic to remain still and be photographed. We were also treated to the spectacle of cows being brought down from the high Alpine meadows and paraded through the main street of Kandersteg clanging their huge bells, their heads decorated with spray of leaves and bright flowers. A girl on the Geneva train told us the Swiss people have a great passion for the mountains and feel compelled to spend time there every year to restore their souls. I know exactly what she means.
We'd an airy sort of day climbing the Jegertosse, a high altitude viewpoint overlooking the Gasterntal with the ice-clad Bahnhorn dominating the view. There is a wooden cross and a steel box containing a visitors book where I logged our names and commented on the wonderful situation. We spent another day locating a high lake called Talaseeli whi 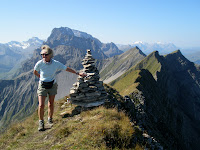 ch we'd failed to find on a previous occasion. This time we found it and lunched above it in scorching sunshine. We climbed the twin mountains of First and Stand which treated us to an adrenalin ridge and an exciting bit of scrambling (cable assisted) between the two.
And of course, we ran, a delightful route with around 1500ft of ascent starting from our campsite, dropping down to the Frutigen road, then rising steeply up through the forest to the Oeschinensee, a green lagoon in a bowl of towering rock - a route we ran several times in our build-up to the World Masters Mountain Running Championships in 2007 where my wonderful partner finished first Brit in her category. I haven't quite got over that. I could only finish second in mine!
Posted by oldrunningfox. at 14:17 3 comments: