Tortoises, or nightingales? Running in Menorca

That was the question we asked ourselves as we shut the door behind us each morning to go for our dawn runs.  Should we run north along the Cami de Cavalls where wild tortoises would likely stop us in our tracks?
Or run west to be serenaded by illusive nightingales as they skulked in the leafy trees to blast out their beautiful songs?  Nightingales won 8 times out of 12.
We were once again at the Xuroy in Menorca where I'd celebrate my 85th birthday in relative quiet. 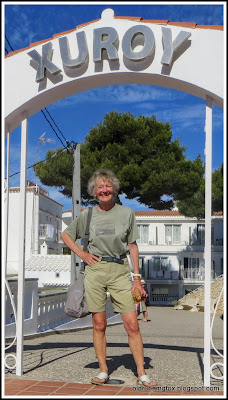 I hate parties and celebrations, unsociable creature that I am, so prefer to get away from it all where no such things can happen.  I'm not too keen on birthdays either but prefer them to the alternative.
As on a previous visit we were first to arrive at the hotel, which opens May to October, and the staff hadn't quite got their act together.  We'd been promised a room facing west, overlooking the pool, but were allocated one on the ground floor.  Boss man was called and we got the room we wanted.
The coffee machine growled and refused to part with anything, but the waiter obliged us (regulars) with cappuccinos from the bar/restaurant downstairs.  The toaster was ridiculously slow which resulted in queues as more guests arrived.  Queues blocked access to plates and cutlery which were tucked away beneath the toaster and coffee machine.  As items of food ran out they weren't being replaced fast enough.  My wicked sense of humour had a field day watching fraught expressions and listening to choice language.  Things ran more smoothly during our second week.  A little...
We'd some cracking weather, no rain, temperatures mainly in the high 70's with just a couple of cooler days.
Unfortunately my birthday coincided with one of those cool, cloudier days but was still warm enough for a celebratory run and a swim in the pool.
It felt really good to be running the old trails again.  Jagged and pitted limestone isn't every runner's favourite terrain but it suits us fine and we were out running it on all but two of our fourteen mornings.  Road running is not for us.
All our nightingale runs finished with a rocky diversion to the elevated Martello Tower.  Swifts screamed around us as we stopped for a brief rest to feast our eyes on the wonderful views of Alcaufar and a lighthouse on the uninhabited island of Isla del Aire.  We were told the island is home to a particular species of lizard and a large population of rabbits.
In addition we walked many miles on every day bar one.  Some were linear walks when we'd catch the bus to Mahon or San Lluis and walk back by some picturesque route lined with flowers and aromatic herbs, ringing with birdsong and afloat with butterflies..
We did exploratory walks to archaeological sites, the main one being Poblat d'en Galmes that dates back to 1400 BC.
It covers a vast area with T-shaped taulas, tall talayots, ancient burial chambers, underground food/water storage holes, etc., all on a scale that is absolutely mind blowing.
How those ancient people could move, shape and erect those tons of stone, or excavate vast underground chambers, is beyond comprehension.
Having bought a book listing 'Flowers of Menorca' we went in search of the hundreds featured within its pages.  Either descriptions weren't very good or the many we discovered on the ground hadn't yet been catalogued.  We considered taking the book back and asking for a refund!
We revisited the hidden gem of Cala Rafalet, a rocky deep sea inlet with crystal clear water that belies its depth.  Our intention of going back with swimming costumes later in the week somehow got lost under the welter of other plans.
Fornells is a beautiful little fishing village to the north of the island full of white painted houses and a harbour bobbing with white boats on a turquoise sea. It's also a favourite haunt of windsurfers and kayakers.
Lobsters are a speciality, apparently much enjoyed by the King of Spain on his rare visits, but nowadays a very expensive luxury.  We gave them a miss when the menu priced them at 65 euros, ordered two cappuccinos then shared an apple while waiting for a bus back to Mahon.  We're from Yorkshire!
But we'd enjoyed our walk to the lighthouse and a defence tower high above the town.  We basked on the rocks as the sun blazed down on us.
Far below on the clear, green sea a girl dreamed away the day in her dinghy floating idly on the tide.
Menorca is a magical island and every day we spent there was magical too. I love the little lizards that scamper in and out of the walls, birds of prey riding the thermals, butterflies that refuse to be photographed, cushions of bright flowers that flourish in the barren earth and the wild tortoises mooching among them, the Titian skies and turquoise seas.
But a memory of which I am most fond is of one evening when sunset had left a rosy afterglow cresting the trees beyond the pool. I sat on our balcony in the gathering dark, bare feet on the warm tiles, bare arms and a glass of rich red wine to hand, listening to nightingales.
I treasure that.
Posted by oldrunningfox. at 22:35 6 comments:

Not wishing to shake all those triamcinalone crystals around in my errant Rt eye I'll admit to having had a rather inactive week, a week of watching others exert themselves rather than doing anything remotely physical myself.
But we stormed up Penyghent on Saturday, a 3½ mile climb up the 2,278ft hill that sits like a crouched lion guarding Horton in Ribblesdale.  We were there to encourage runners in the annual Three Peaks race, a 24 mile circuit with 4,500ft of ascent that attracts the cream of British and an increasing number of foreign fell runners.
It was a delectable day for runners, dry with cool breezes, sunny spells and perfect underfoot conditions conducive to fast times.   Curlews called, lark-song tumbled from the air and a lone swallow zig-zagged back and forth over the heathery slopes in search of sustenance. The stage was set.
Tom Owens of Team Salomon was first onto the summit in 28:04, 20 seconds ahead of the Scottish  runner, Murray Strain of Hunters Bog Trotters.
Tom maintained his lead all the way to the Whernside check point where he was a minute up on Murray.   But, horror of horrors, he took a wrong turning on the descent that dropped him back to 4th allowing Murray to snatch the lead and hang on to it to finish 1st in 2:49:38.  Tom fought back to finish 2nd in 2:54:00 with a Clayto-le-Moors Harrier, Chris Holdsworth, 3rd in 2:54:49.
But men's performances were well and truly eclipsed by the three time winner of the ladies race, the incredible Victoria Wilkinson of Bingley Harriers.  She was an easy winner last year, battling through the snow to beat a top class field that included the highly rated Nepalese runner, Mira Rai, who'd triumphed in prestigious International races.  But snow and slippery conditions were not conducive to fast times.  This year things were better and Victoria took full advantage.
In a field of around 760 runners I didn't even have my camera ready when she emerged on Penyghent's summit in an amazing 31st position, so failed to get a decent shot of her.
She was far too fast for me!
By the time she reached the next summit, Whernside, she'd picked up 6 places to arrive in 25th.  On Ingleborough she'd battled her way up to 16th, then ran the final five miles to the Finish in an incredible 29:21 to finish 13th overall.  Her time, 3:09:19, annihilated the previous ladies course record of 3:14:43 set by the Czech Republic runner, Anna Pichrtova when the race hosted a World Long Distance Mountain Challenge back in 2008.
"Here's Victoria" someone shouted, and again I didn't have my camera ready as she came hurtling down the finishing field, all smiles and arm waving to the cheering crowd.  She never looked so happy.  Not only had she set a new course record but her 13th position overall was the highest ever recorded in the race by a woman, ahead of Sarah Rowell's 15th position in 1996.
I'd a wee tear in my eye as I went to congratulate her.  As a neighbour in Hebden village we'd watched her athletic development from early teens, marvelled at her achievements throughout her 20's and into her 30's both in running and cyclo-cross, seen her recover from soul destroying injuries to rise like a phoenix and become a shining star on the International stage.  Now, at 38, she put it all together in a performance that will forever remain in the memories of all who witnessed it.
Well done Victoria, you did us all proud....again.
By comparison Sunday's 3rd stage of the Tour de Yorkshire was a damp squib.  We'd trudged across the fields from Hebden to watch riders leaving Burnsall to ascend the hill up to the Thorpe turn-off.  We deliberately avoided Burnsall, where we believed the street would be crowded, to position ourselves on a quiet bit of road a mile or so beyond.

Huh, after fighting off a herd of bullocks clustered in a gateway we arrived at the road to discover an awful lot of other people, walkers and cyclists, had seemingly had the same idea.  We waited, and waited, as countless police motor cyclists sped past at great speed, sometimes dangerously close to us on the narrow road, blaring their horns and generally annoying people.
A gentleman with one of those clever smart phones was watching the race progress on its tiny screen. "They're here" he said, as the lycra clad hoard rounded a bend and hurtled towards us.  Seconds later they were gone.  And that was it.  Unless anyone could derive interest from the endless stream of back-up vehicles and ambulances that trailed along behind.
To be honest, I got far more pleasure chatting to a couple of delightful lady spectators, one of them the daughter of a chap called Malcolm Seward, a runner I'd battled with in the Peaks and other fell races.
Roll on next years Peaks race.
Posted by oldrunningfox. at 21:07 12 comments: