My plan for last Sunday was to run a little further, to get strength back into my legs, but we'd been celebrating Burn's Night so things got a bit out of hand.  A horrible pain in my nether regions caused something of a delay at the start of our six mile jaunt to Appletreewick but after a brief stop we were soon on our way.
It's nearly six months since we ran this route and I was really looking forward to running the riverbank again.
A dipper bobbed around on a stone at Loup Scar but by the time I got the camera out, it had gone,
It was early morning and I can only remember passing four people and none of them had dogs.  Quite an unusual occurrence!
We pressed on, following the river past the Red Lion in Burnsall  (it was shut, not that I'm ever allowed in such places) and through Daggett's car parking field to Woodhouse Farm.
Here, we normally leave the river for a short loop onto the road, hence the name - the Appletreewick lollipop.
In half a mile or so we cut back to rejoin the river at the campsite.
We'd run three miles and were now at the half way mark and turning for home with a cool wind in our faces.
There were no hills until the last ¼ mile, it was all delightful running, through Burnsall, over the River Dibb that flows into the Wharfe, past Loup Scar again and on to the Suspension Bridge.
After another mile we'd got into our stride.  Breakfast was calling.
We'd never seen a cormorant on the river before so were surprised to see one perched on a rock mid stream, wings outstretched.
We tried to take a decent picture of him but he flew away. We ran on.
It's a lovely stretch of river to the Suspension Bridge and we never tire of running this, especially when we have it to ourselves!
Pretty soon we reached the Suspension Bridge and out onto the tarmac again. It was steep tarmac and shhhh,, never let it be said, we walked up it....   It was only 150 yards or so.  Pretty soon we were home enjoying porridge and coffee, crumpets and honey.
Well, I was.....
Posted by oldrunningfox. at 21:12 4 comments:


The forecast was good for our neck of the woods so we were determined to make the most of it.  On Saturday we went walking over Hebden Crag, past Mossy Mere and back via Hebden Ghyll.
I needed some hard uphill work and some faster running to get the old body operating as near to optimum as possible. for my age 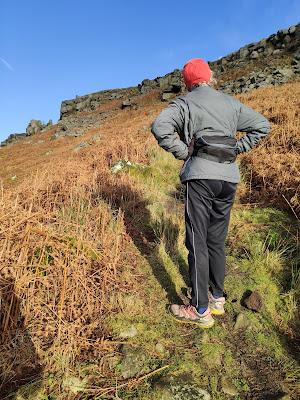 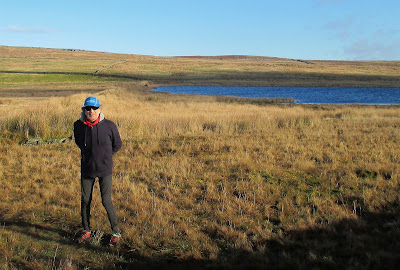 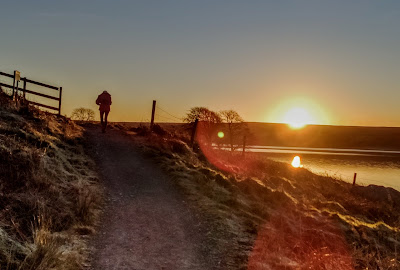 Running into the sunrise 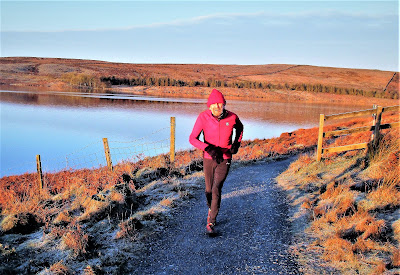 Feeling a bit of warmth in the sun 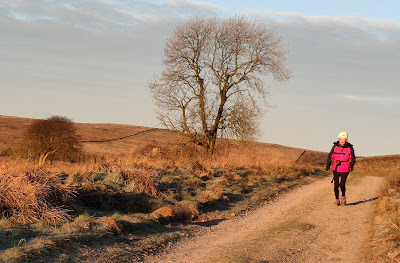 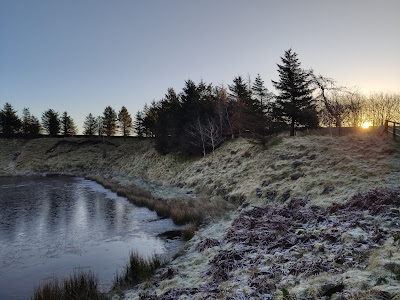 Sun rising on a frozen landscape, back o' Grimwith 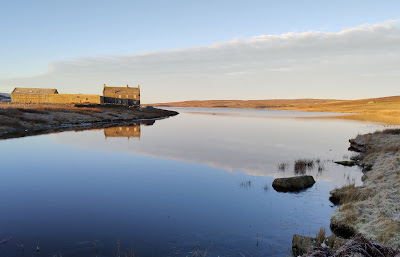 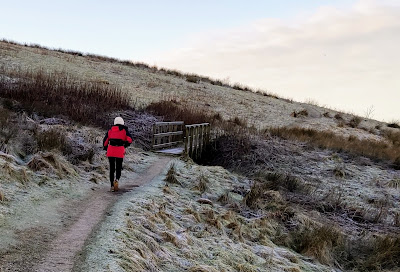 Back into the shadows under the hill 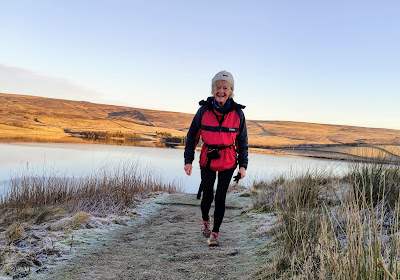 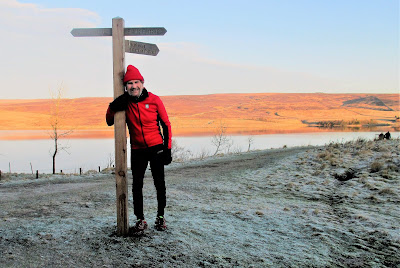 A full moon was lighting up the bedroom when I awoke at 6.30 last Friday morning.  After injections to both eyes on Thursday that almost blinded me I'd gone to bed early.  Now, I could see again and was rarin' to go for a run to erase nasty memories of the previous day.
I stepped out under a clear sky into a silent world.  Grass was brittle and glittering in the moonlight as I made my way through frozen fields towards Castle Hill.
At breaking dawn the local poacher materialized from the gloom with his two whippets and asked the inevitable two questions,  "Have you seen anything of Geoff lately (a mutual friend who is quite ill)" and "how is your prostate now?"  I answered  "No" to the first question and "It's manageable" to the second before tackling the final steep slope to the summit.
The sky had lightened to pale orange as I circled the rim of the hill for a couple of circuits, waiting for the sun to peep over the horizon.

I didn't have to wait long.  Pretty soon the whole landscape was awash with the sun's fiery rays and for the first time that morning I began to feel warm.  I jogged home in search of further warmth, hot porridge and a mug of reviving coffee.
It's two months since my last radiotherapy treatment and I haven't yet found the eagerness to run.  The Oncologist told me it would take time to recover but I didn't expect it to take this long!  Perhaps my 87 years has something to do with it?
But I'm trying.  Early morning reps on a local cricket field, stopping and jogging home when the sun comes up, is a current favourite.  I don't like folk seeing how much I've slowed!
And, together with my wonderful partner I've been on dawn runs round Grimwith reservoir.
She sometimes has to wait for me, which rankles a bit, but she is a tiny bit younger than me....
...which is better than thinking the radiotherapy hasn't worked.
Posted by oldrunningfox. at 18:47 2 comments: