The opening of Burnsall Feast Sports this year was much enlivened by the Penny Plain Theatre Company appearing in the guise of a rabble of down and out Victorian actors performing songs, dances, a hilarious Mummer's play and various bawdy sketches interacting with embarrassed members of the audience. The action took place under the shadow of a huge Wicker Man towering over the village green for the very first time at Burnsall Sports.  The flag on the fell top that normally flutters over the proceedings had blown away during the morning's high winds!
The wind was still gusting a bit as the 10 mile road race got under way at 2.30 but it was sunny too, perfect for racing. Having suffered a hacking cough since the Arncliffe race I'd called at the chemist in Grassington in the morning and asked Sue for the most potent cough medicine available. "I'm racing the Burnsall 10 in a few hours time" I told her, so the magic fluid hadn't much time to do its job!
With over 950ft of ascent the road race has more feet of ascent than the classic fell race which takes place a couple of hours later. It's uphill from the start but the worst bit hits you at 7¾ miles where it climbs 195ft in just over ½ mile to the village of Thorpe. Surprisingly, my old legs coped very well and I actually managed to gain a couple of places on that Thorpe section. I was 89th of 116 finishers in 87.36 which was a tad faster than I'd expected in view of my race rustiness this year. Bring on the Langdale ½ marathon!
This years classic fell race over 1½ miles/900ft ascent marked the 100th anniversary of Ernest Dalzell's record breaking run when he completed the course in 12minutes 59.8 seconds. Special T-shirts had been printed to mark the occasion with a blank panel on the back for runners to record their own finishing time.  Nearest to Dalzell's mark, but exactly one minute slower, was Pudsey and Bramley's Rob Hope with seven times winner Ian Holmes (Bingley) in 2nd and Ilkley Harrier Tom Adams in 3rd.  Local lad Ted Mason of Wharfedale Harriers came home to enthusiastic applause in 4th place and had the pleasure of leading home the winning team.
A film crew were there throughout the day and it was rumoured the days proceedings were being filmed for an outdoor programme on Channel 4. At the traditional mass hymn singing a camera and microphone were hovering over my head as I croaked and coughed my way through 'Jesus shall Reign'. Sue's recommended cough mixture was apparently beginning to work.
Posted by oldrunningfox. at 18:32 4 comments:

In the run up to Saturday's four mile race at Arncliffe I took things very easy today. A nice, slow enjoyable run through waving woods and fields of golden corn. In stubble fields that have already been harvested hundreds of wood pigeons and strutting pheasants were filling their crops with leftover wheat that had obligingly escaped the thresher. Three Roe Deer went flouncing through the corn along their own secret path to the sanctuary of nearby trees.
It was a wonderful feeling to be moving effortlessly under a benign sky with a cooling breeze through this beautiful landscape, not as 'monarch of all I survey' but an intrinsic part of it, as much at home there as the deer, the wild birds and the solitary hare that steals from his form at night.  According to this morning's newspaper a young girl just over the hill from where I was running scooped £1.1million pounds on the lottery last Saturday. If it were possible to evaluate, how would that Holmfirth teenager's new found wealth and happiness compare with that of an elderly man running enraptured through a sea of golden corn?
Posted by oldrunningfox. at 18:44 5 comments:

I'd no sooner entered the Great Langdale ½ marathon last weekend, online, than my race number plopped onto the mat along with a letter from the organiser that began "Dear oldest runner ever"..... and ended with a PS that said "even if you don't win the MV75 category you'll still get a prize for the oldest runner to finish".  Now, isn't that nice?  Thankyou Rocket Rod.  But what's the betting some gnarled octogenarian will get wind of this and crawl over the finish line into a waiting ambulance just seconds before the prize-giving to spoil my day?
Anyhow, I've stepped up my training this week, just a little. Good old Joe Henderson of 'Runner's World' fame has put me onto the 1-1-1 plan. What the heck is that, you may well ask? Well, all I have to do is run one mile, once a week, one minute faster than my normal training pace.  In his book, Better Runs, Joe relates how this plan knocked 3½ minutes off someone's 10K time after only four weeks. I doubt very much whether that person was 78 years old but nevertheless I'm giving it a go. However, to speed things up even more I modified it slightly, making it into a 1-2-2 plan by running one mile twice this week at two minutes faster than average training pace.  Watch this space!
The weather was kind last week, at least while I was out running. In sun and wind, with heather in full bloom, I'm always tempted to run miles farther, enjoying the heady scent for the short time it lasts. On Sunday I followed a twelve mile circuit around Grassington Moor with a cool 1,800ft of ascent thrown in for good measure.  With only four days to go until the 'Glorious Twelfth' the moor was brimming with grouse, all seemingly in prime condition.  And I saw something else I've never seen before in the twenty years I've been running up there......lizards. At Howgill Nick a small one, not much bigger than a newt, scuttled into the heather a fraction of a second before my big foot was about to land on it. Then I disturbed a larger one, perhaps six inches, sunbathing on the gravel track towards Mossdale. All in all it was a wonderful run.  I returned home a very happy man, and a very thirsty one at that!
Posted by oldrunningfox. at 17:07 3 comments:

Years ago, before my wonderful partner retired from teaching, Friday evenings were rather special, a time to unwind, to put the pressures of work and cares of the week completely out of her mind, to totally relax and hopefully continue this mood throughout the weekend. Out came the red tablecloth, on went some soothing music, a candle was lit and a nice bottle of wine uncorked to accompany our evening meal. Since her retirement, five years ago, 'red tablecloth night' has shifted to Sunday. Ministers conducting the evening service are in danger of being boycotted if they habitually preach for too long, thus keeping yours truly away from his gastronomic delights - and his wine! 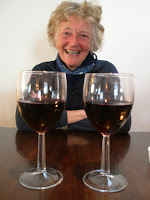 What's this got to do with running, you might ask?  Well, the clue is in that word 'wine'. Depending upon ones state of mind, stress levels, tiredness, or whatever, alcohol can make one do some very strange things. I can only surmise last weekend's Sauvignon Blanc was of a particularly potent vintage, much higher than the 12% it said on the bottle, for it conned us into doing something particulary odd.
Like what, you're wondering?  Like switching on the computer at way past bedtime, downloading an entry form for one of the toughest road half marathons in Britain and entering online, just like that!  What's more, there doesn't appear to be a get-out clause for people who change their minds when the effects of alcohol have worn off. It seems we're fully committed to run the Great Langdale ½ marathon on Saturday, September 25th, whether we're fit, or not. I suppose we should thank our lucky stars we didn't have a brandy to round off the evening or we may well have finished up in the Marathon des Sables!
Posted by oldrunningfox. at 21:33 6 comments: