It's been a funny old week when running was reduced to a meagre 9 miles. I'd an appointment with my doctor 8.30 Tuesday morning which effectively put paid to any thought of a pre-dawn run to watch the sun rise.
I did manage to get my bum out of bed early on Wednesday though the weather was pretty atrocious in our neck of the woods, very much a prelude to the main act the following day when Storm Doris took to the stage.
I was buffeted all over the place with a violence that took my breath away. After battling slithery, waterlogged fields and muddy slopes I aborted after 3 miles and actually toyed with the idea of going back to bed.  I resisted.
Though Thursdays are normally running days there was no way I was going to venture out to battle with Storm Doris.  I switched the TV on for latest updates but could hardly hear it for the wind howling down the chimney.  Bird feeders were swinging all over the place and a silver birch in next door's garden was intermittently bending to near 45º.  All my crocuses wisely stayed shut.
It's rough up here in the Pennines...
For all sorts of reasons both Friday and Saturday were non-days. An upsetting piece of news told me one of my mentors, Derek Ibbotson, who'd been suffering from dementia, had died in a local care home at the age of 84. The same age as me.  He was a Longwood Harrier and one time world record holder for the mile with 3.57.2
R.I.P. Ibbo, you did our club proud.

So it was Sunday before I donned my running gear again for a 6 mile run round Appletreewick (encouraged by a good kick up the backside from my wonderful partner!). The brief rest had done me good for I was running smoothly and easily from the word go.  Relatively speaking...
The River Wharfe was swollen after the previous days persistent rain and paths were a bit puddly as we set off into a cold, 14mph south west wind.  Other than a pair of goosanders, the odd mallard and a gull that circled me on Burnsall Bridge, we saw little in the way of bird life.
Walkers were out in force and I'd to reprimand one little group for leaving gates unfastened, a common occurrence that really annoys me (that, and cyclists who hurtle up behind me on narrow roads with no warning and others who hardly ever acknowledge my greetings).
Dunno whether it was the lay of the land or the winding of the river, but the wind that was against us on the way out was also against us on the way back.  Luckily, we'd warmed up by then so it wasn't much of a problem. For me!
We were home for lunch.  It rained for the rest of the day...
Weren't we lucky?
Posted by oldrunningfox. at 20:00 2 comments: 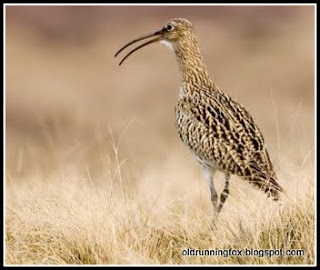 In a few more minutes we were passing through the gates of Linton House where lawns were smothered with shining white snowdrops, the most we'd ever seen. But perhaps we say that every year when we visit this site.
Reluctantly, we left them to jog through the pretty little village, watching mallard playing in the water by the bridge and revelling in the warmth of sun on our bodies before striking steeply uphill to Langerton Lane and the hidden hamlet of Thorpe.
Daffodils buds were thinking seriously about opening in a wild bit of garden where aconites and snowdrops were flowering among a mass of fallen berries.  And hiding among them was a solitary primrose, a bright splash of yellow in the kaleidoscope of colour.
From Thorpe we'd a mile of enjoyable downhill running to the suspension bridge over the Wharfe before striking up through the ghyll back to our village. A steady 7 miles to put our snowdrop run to bed for another year.
We were up early on Sunday morning for what's becoming a regular run round Grimwith reservoir. And we were glad we did. The sky was burnished copper as we drove towards Dibbles Bridge but it disappeared behind the hills as we turned into the huge bowl of Grimwith.
A noisy gang of oystercatchers wheeled away over the water as we ran across the dam.  Then greylags kicked up a rumpus as we passed a favourite grazing area below the old ruined barn.
But best of all, a pair of curlews were calling across the water and another solitary one answered from the moor high on our left.  Before that we'd spotted a lone lapwing but further along a whole flock of them took to the air as we approached.
All those harbingers of Spring lifted our spirits and filled our hearts with joy.  And a field of lambs at Turf Gate on our drive home only added to the euphoria.
A couple of hours later in a crowded chapel in Grassington I'd an awful lot to be thankful for.
I'm sure I out-sang everyone.  Judging by the looks I got......
Posted by oldrunningfox. at 19:19 4 comments:

A light covering of snow on last Thursday's morning run over Castle Hill.

Ice on a proposed Sunday morning run round Grimwith with a wind chill of -5ºC. Not wearing Yaktrax we aborted on grounds it was too dangerous.

"Charles Booth please" a voice shouted my Sunday name from somewhere down the corridor in the Plastic Surgery unit. I set off in the direction from whence it came but no-one was there. I pushed partially opened doors. Rooms were deserted.  Eventually two nurses appeared, chatting cheerfully. One of them checked my name and led me to a room where an immaculately dressed man sat at a table peering stony faced at notes in front of him.
"Ah, the gentleman I came up in the lift with" I said, recognizing him. I assumed it was Mr Mahajan, for that was the name on the appointment form. But he didn't have the courtesy to introduce himself.  Without so much as a glance he ordered "Sit down" - as if he was speaking to a dog. Immediately my hackles rose.  I took off my coat, ready for him to inspect the eruptions on my back and arm.
"Where was the biopsy taken from?" he asked. I pointed to the wee scar on my forehead. He got up from his chair, yanked my head round to examine the spot, then proceeded to do a little drawing of my forehead, shading the area where he planned to operate and telling me there'd be a little scar afterwards. Meanwhile the nurse, Amanda, unceremoniously stuck a swab stick up both my nostrils to test for bacteria.
I told him about the potential BCC's on my back and on my arm, how they itched and sometimes bled onto the bed sheets. He wasn't even listening. "That's all, you'll receive an appointment for day surgery in two to three weeks".
Like hell I will, not with you matey. As soon as I got home I rang the hospital to cancel the operation, effectively discharging myself.   I don't want to see that rude, ill mannered and unfriendly Mr Mahajan (?) again, ever.
Running-wise, it was another poor week. Twice I'd rolled out of bed in darkness, donned my running gear and stuck my nose out the door to start my run only to find it was windy, raining and misty.  I aborted on both occasions, not wishing to get cold in my eye to aggravate any remaining inflammation.
So it was Saturday before I braved the elements to set off with my wonderful partner for an 8 mile run over Bycliffe Hill.  It had forecast wall to wall sunshine in the afternoon but guess what, we'd set off in the morning into a nithering south westerly and sporadic showers.  And where did the first shower hit us?  At 1,500ft on the windiest and most exposed part of the moor.  I didn't mind, I'd stopped to don a windproof jacket and my eyes were protected with wrap around shades and a cap.
To make things more atmospheric and enjoyable there was a light dusting of snow across the higher part of the moor, highlighting a sheep trod all the way across to the Mossdale track. The shower soon fizzled out to allow a smooth 3½ mile run for home, down the long wall and into the ghyll just as the sun came out again.   It would, wouldn't it, when we'd nearly finished.
I've a bit of catching up to do this coming week - between a visit to my doctor and an appointment with the optician......
I sometimes wonder if I'm starting to get old?
Posted by oldrunningfox. at 21:44 8 comments: