We left home with umbrellas up on a dark, cold rainy morning en route for Leeds/Bradford airport for a flight to Alicante. For reasons best known perhaps to inmates of a local asylum we were bound for Benidorm to run in their annual International half marathon. At 9am with visibility down to around 40m we'd visions of our flight being cancelled but by 10.30 it had cleared a little and we 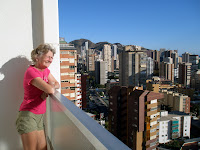 took off at 11am, just 15 minutes behind schedule. All was well. Well, almost. Although we'd booked our flights together Jet2 had split us up so we spent the next 2½ hours in silence.
A representative (called Kipper) of 'Running Crazy' met us, as arranged, under the green flashing cross at Alicante airport and fairly soon we were whisked into Benidorm and dumped at the door of the exceedingly plush Poseidon Palace Hotel. Initially we were given a south facing room on the twelfth f 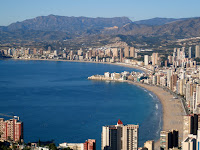 loor but for the last three nights we were moved to a similar room at the very top adjacent to the honeymoon suite. It afforded spectacular views towards the sea, of hills glowing red at sunrise and a kaleidoscope of multi-coloured lights as night fell. We reckoned it was the best room in Benidorm.
The race took place on the morning after our arrival when I was pretty well at my lowest ebb. In a strange bed I'd not slept very well. After strange food the previous night I woke up with tummy ache and diarrhoea (embarrassingly so). Also, my neck was playing up s 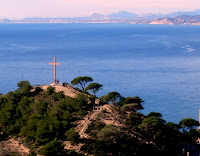 o I couldn't turn my head in any direction without considerable pain. I'd taken 600mg of Ibuprofen before breakfast but needed more. Four minutes before the start of the race I was still perched in the portaloo.
I charged out and joined the tail end of over 2,000 runners just as the gun went off accompanied by a noisy fireworks display. We all had timing chips so it didn't really matter how long it took to cross the 'Start' line, but I was going to have to do an awful lot of bobbing and weaving to make up time before I could settle into my race pace. I passed hordes of people in the first mile or so before drafting behind a tall fellow who was able to slow me down to a more reasonable pace. After about two miles, when I'd recovered somewhat, I left him in pursuit of a slightly fast 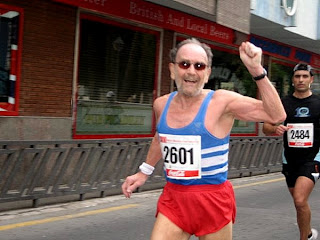 er runner wearing a buff, pirate fashion, on his head (behind me in the picture) who I managed to hang on to until the last mile or so when he sneaked away. Somehow I managed to smile and raise my arms in triumph as I crossed the 'Finish' line in 1.49.52.
It had been a very hard race but enjoyable (sort of) on an almost dead flat course in ideal racing weather. My only gripe is that veteran prizes only extended to 1st male and female Vet 60's. If a small race like our local Meltham 10K, which attracts around 250 runners, can award prizes in all the 5 year veteran categories, why can't a larger International race of 2,500 runners do the same? My wonderful partner just missed out on an LV60 prize and I was officially 45th MV60. Unofficially, in spite of my terrible time, I was 1st MV75! Results here:
Posted by oldrunningfox. at 12:55