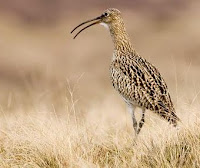 According to Ted Hughes:

Curlews in April
Hang their harps over the misty valleys
A wobbling water-call
A web-footed god of the horizons......

Well, this wonderful harbinger of Spring was trailing his wobbling water-call across Grimwith reservoir a couple of months earlier than that this year along with whistling Teal, a raft of bugling black necked Canada geese and the happy piping of early Oystercatchers strutting by the shore in their best tuxedos. Frogs have already gathered in a reed-bound pond for their annual orgy. Lambing fields at Bolton Abbey are heaving with new life whilst lawns and garden are bright with Spring flowers - snowdrops, crocuses and yellow daffodils. Here's a very short poem of my own that sums up this exciting change:

From depths of winter melancholy we're suddenly reborn into another glorious new year. We come alive again. Spring is easily my favourite season for running, when each foray into the great outdoors provides a new thrill. It's a season of 'firsts' to note in our diaries - first celandine, primrose, wheatear, ring ouzel, pewit, skylark, new-born lamb - but it's always the return of the Curlew that is most uplifting for me. From mid February onwards I'll visit their wild haunts day after day to catch that first thrilling sound. For me, it heralds Spring's awakening just like the first Swallow, for many, presages the arrival of summer.
In other respects it's been a wild and windy week, though there were benefits to be had from this, particularly during bouts of speedwork high on Castle Hill. On my horse-shoe shaped route the wind was behind me from whichever end I chose to do my repetitions. I was experimenting with a metronome to optimise my cadence at 96 (Rt foot plants) per minute. It's not easy when doing fast reps. Sometimes I'd swear the confounded implement was slowing down whereas it was actually me speeding up and getting ahead of the beeps.
Conversely, on a ten mile jaunt around Mossdale on Saturday an almost gale force wind somehow managed to be head on both out and back along the trail. I'm not sure how it managed that but it sure slowed me down. I didn't care. It's my longest run since December, so all is going well for my 12 mile event in two weeks time. I just hope I can get rid of this lingering cough by then.
Just after the Curlew had called to us yesterday a miracle occurred. Last August while walking (note) through long grass high above Conistone I caught my foot in a rabbit hole, fell over sideways, and badly twisted my Rt knee. It's pained me ever since, so much so that long runs have been preceded by large doses of painkillers. On Saturday, for instance, I washed down 600mg of Ibuprofen an hour before running around Mossdale. A physiotherapist I'd visited said there was nothing he could do about it (though he still took my money) suggesting I see my doctor, get it X-rayed, and possibly be referred to our local hospital for an arthroscopy. X-rays were 'clear' so I was about to ask my doctor for an MRI scan. However, at the end of yesterday's run there was a fence to climb. As I swung my leg over I clumsily clouted the inside of that self-same Rt knee which resulted in a shot of pain that soon subsided. While preparing breakfast this morning it suddenly dawned on me I'd walked downstairs in a perfectly normal manner rather than the crab-like sideways shuffle, one step at a time, of the past six months. Jokingly, I suggested to my wonderful partner that Saturday's dose of Ibuprofen seemed to have taken a long time to work! But as I write this, nine hours later, my knee is still free of pain. Hallelujah!
Posted by oldrunningfox. at 16:12