Christmas and always heave a huge sigh of relief when the shopping is over, all the cards sent, presents sorted out and we can eventually get around to the actual process of celebrating; eating, drinking and being more than usually merry. Regardless of advice from my Consultant I eat and drink just about everything I shouldn't, as long as I have an adequate amount of relevant medication to bung or un-bung my stupid growling gut on the increasing occasions it starts to erupt. I really must begin treating it with a little more respect in 2015. Honest Doc!  Problem is, I've lived on steak nearly all my life and reluctant to change to something I don't really like. Besides, other menus might be a little more complicated and take longer to prepare than four minutes under the grill. Quick and easy is how I like things.

And talking of meat, our last port of call on Christmas Eve was at my local butcher's where the bill came to £31.00 for a fair sized free range chicken, a large joint of pork and a joint of beef rump (both vac-packed to take to Scotland), some bacon and half a dozen pigs in blankets. That nice little parcel lasted until 4th January, the only addition being an exceptionally flavoursome haggis from a butcher in Dalbeattie for our New Year's Eve celebrations. A lady in the queue at my local butcher had paid £10.00 more than me, £41.00, for just a turkey. I wonder if that lasted her into New Year? If it did she'd be heartily sick of it's texture and taste by then. We prefer a bit more variety.

Needless to say, quite a lot of running got done over the festive period, 39 miles to be precise, over a
variety of terrain. Mileage was a little sparse on Christmas Day and Boxing Day due to various other commitments - having to be back at 11am to uncork the champagne for the old lady next door, for one thing. On Boxing Day I'd pledged to be out running at 11am with people throughout the world in remembrance of Mike (Mad Dog) Schreiber, a legendary athletics coach, who sadly passed away in November. I'm not sure why I did this. He wouldn't coach me after I contacted him with a profile and list of M60 PB's. Maybe he thought I was an impostor, not believing my PB's, or didn't need help if I was already running sub 3 hour marathons and 60 minute 10 milers. However, he did give me a list of exercises for easing back pains, and I still use them. I also have his book, The Art of Running, duly signed by Mike and inscribed - The 'Art' is in having Fun!  I'll second that..

The bulk of our running was done in Scotland, always before breakfast, setting off in darkness in
hopes of seeing the sun rise. We hadn't realised how much later the sun rises in Scotland compared to the north of England. We set off circa 7.50am along the treacherous, icy cliff path, but it wasn't until 8.49, on reaching Rascarrel, that we caught a glimpse of the sun peeping over the horizon across the Solway. I'd been hoping to take action shots of my wonderful partner teetering along the edge of the cliff with a huge drop into the sea only inches to her left but it was still dark as we passed there. Stangely, it didn't seem to bother us in the semi darkness but when I later walked it in broad daylight I got quite a shock! Sunrise turned the sea scarlet, gulls were crying their delight and curlews called joyously. We ran easily, having reached the flat part. When alone I like to sing while I'm running, though not with my wonderful partner who, I think, regards it as a form of 'showing off'. She certainly seems annoyed if I'm whistling and running!

Temperatures got as low as 25ºF and rarely rose above freezing throughout our hoilday. Freezing fog greeted us one morning as we opened the door and stepped out. There was no wind nor any sound from the sea as we ran along the cliff top, just an eerie silence broken only by the occasional scrunching of ice beneath our feet. Loch Mackie was icebound too with hoary white shrubs bowing their heads along its banks. Further towards Airds Cottage a string of horses materialized from the fog and raised their heads to greet us, one of them a hairy old stallion with a tail that touched the ground, trousered legs, long main and masses of facial hair that covered his eyes. Sight of him inspired a quiet rendering of 'Wild Horses' - after I'd got a bit ahead of my wonderful partner! I ran that five mile circuit four times, the last time alone when, amongst the songs I sung, I even remembered a Gaelic chorus I hadn't sung for years. On a fifth bitterly cold morning we ran a slightly longer route round Auchencairn and back by Loch Mackie. I must say, I prefer the narrow cliff path with the sound of the sea crashing on the rocks, exciting situations and gulls crying. Road running is soooo boring.

We returned to Yorkshire on January 3rd and were out running again on 4th to - guess what - suss out part of a route my wonderful partner is guiding a party of U3A walkers round on January 15th. It was a glorious sunny day, not a cloud in the sky and the temperature down to -2ºC. Ideal for running. It took a while to defrost and warm up the car before setting off to Grimwith Reservoir to start our five mile route. Frozen bogs are not the easiest of places to run on so progress was a bit slow until we crossed the main B6265 road and onto a gravelly track with runnels of hard ice. Leaving that we joined a grassy track, white with frost, to cross a stream that tumbles into Trollers Gill. Old mine workings and shafts dotted the landscape as we negotiated further frozen bogs before crossing New Road from whereon the going was grassy and easy all the way back to Grimwith. A very pleasant run in ideal conditions.

A phone call told me our afternoon Church service was cancelled. The minister was ill. Just as well
because we needed time to take down the Christmas tree and all the trimmings, so it's doubtful whether I'd have made it to Church anyway. With the demise of the Christmas tree the festive season is officially over and it's time to maybe consider some New Year resolutions. At my time of life I'm more likely to say 'Sod it, what will be will be' and carry on taking the medicine. But a little gremlin inside my head keeps saying "You really ought to do something about your diet, you know. Red meat isn't doing you any good at all and you might just squeeze out a few more years if you knock one or two things on the head and replace them with something more tolerable". Well yes, I know that, but getting uaccustomed to changes after 82 years isn't easy. I'm an old 'stick in the mud'. I've got used to certain tastes and textures and flavours and if I don't like what's in my mouth I spit it out. I haven't vomited in nearly 50 years (I well remember the last time, but wont go into that!)

. Nowadays I can stomach anything. It's that 27ft of piping below there that gives me trouble. After seeing a wonderful photograph of a lady Vegan runner finishing all smiles at the end of a 10 mile race I tentatively looked at a list of Vegan foods but didn't recognize 90% of the names. So stuff that. (But hang on a minute while I wash down another dose of Loperamide). Anyway, I'm thinking about making changes but never in a million years will I begin eating something I don't like just because it's supposed to be good for me. If anyone can come up with an aesthetically pleasing diet that's simple to prepare and doesn't evoke Vesuvius-like eruptions in my nether regions I might give it a go.

Oh, and the only other resolution my wonderful partner and I have made is to do one or two Park Runs together. I might agree to the 'one' bit of that resolution! Happy New Year everyone.......


For anyone interested here are a couple of maps showing routes we ran over the festive period:
First up is the circular route we ran on four mornings from GR: NX 822 494, our hired cottage at Balcary Bay. Garmin said it was 4.80 miles with 755ft of ascent. The narrow cliff path from Balcary Point to Airds Point is not for the faint hearted. Better to get it over while it's still dark!
And say 'Hello' to the wild horses after Loch Mackie. 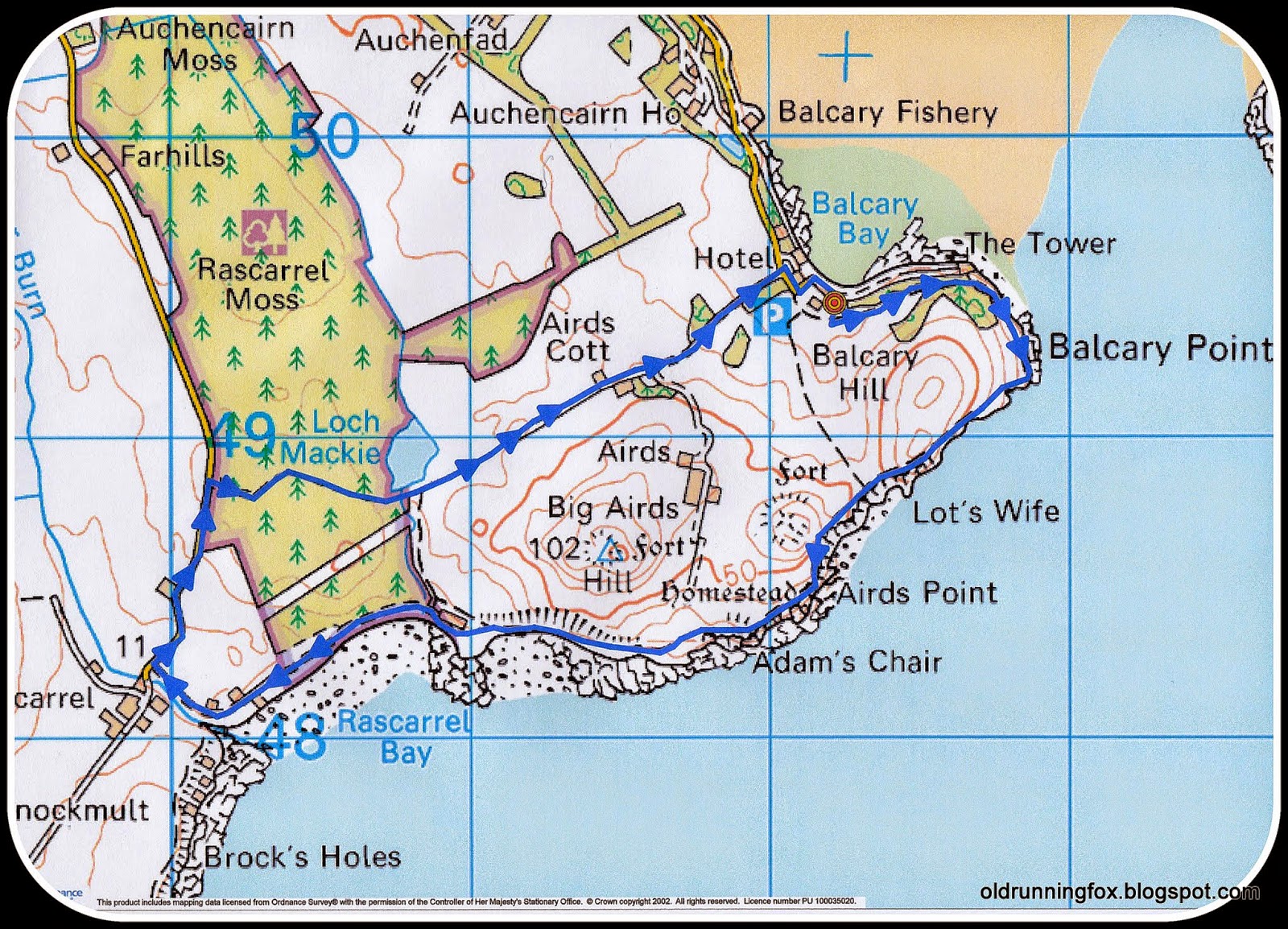 Second up is a bit of the proposed U3A walking route (which we ran) with a Start/Finish at GR: SE 063 640, the parking lot by Grimwith Reservoir. Garmin measures it at 4.97 miles with 804ft ascent. 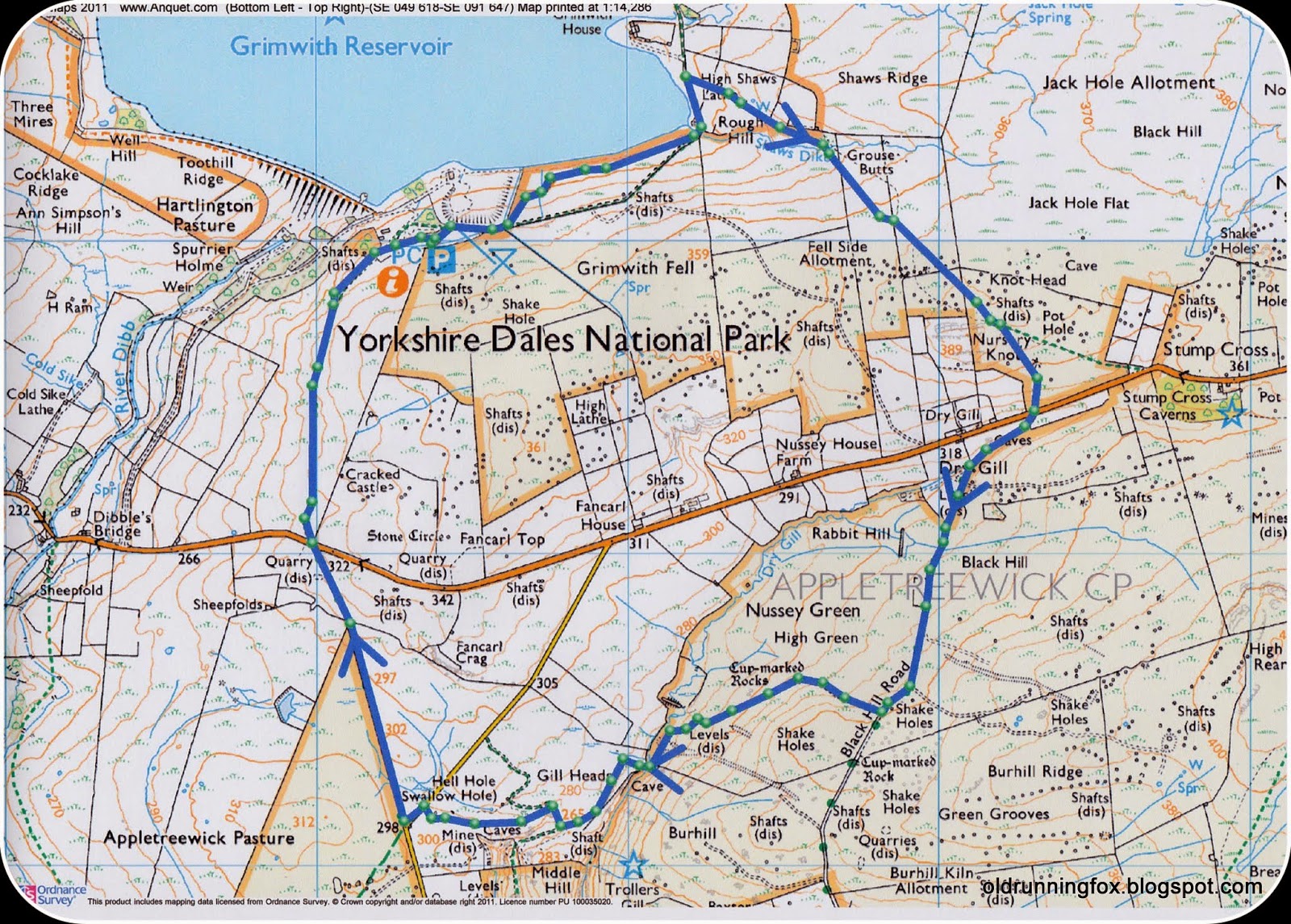 Happy running everyone...
Posted by oldrunningfox. at 21:28