Fast uphill walking and downhill jogging, amounting to little more than ten miles, is all that got done in the way of energetic pursuits last week.  In truth, a lot more time was spent watching others rather than doing anything worthwhile myself.
The inaugural Tour de Yorkshire was a damp squib so far as I was concerned. We’d walked a mile towards Greenhow to a place we thought would be a good vantage point and sat on a cold mossy wall for around an hour - waiting.  It was a spot where we’d see them coming in the distance and have plenty of time to focus our cameras and get some good shots as they zoomed past.  A good idea, but it became a little boring after countless Police outriders flashed by intermittently with no sign of the actual peloton of international riders.
A helicopter eventually heralded their arrival - ¾ hour behind schedule. I focused my camera upon them but – sod’s law - the video mode failed to function and I got nothing! For me the event went by unrecorded. Fortunately, my wonderful partner sensibly shot one or two ‘stills’ – if you can call them that of riders sweeping past at over 40mph!  In seconds they were gone and we recognised not one of them.  A waste of time really.
After all the waiting in arctic conditions we were frozen to the marrow, my bum was soaking wet from damp moss on the wall, and we’d to run home as fast as we could to get changed and thaw ourselves out.  Most sensible people in the village watched the race on telly with a reasonable commentary to explain all that was going on. They knew exactly where the riders were so could nip out into the road just minutes before the peloton swept through. Next year, I wont bother. And telly is not an option... I rated it 1/10
Saturday was far more interesting. We set off early to Horton in Ribblesdale to watch the 62nd running of the Three Peaks race. We arrived 1½ hours before it was scheduled to start at 10.30am, so had time to walk up Penyghent - the first and lowest of the Three Peaks before Whernside and Ingleborough - and hopefully get there before the runners.
It was sunny but bitterly cold as we set off up the stony track towards the snow capped towering giant in the distance. A local farmer was feeding a noisy flock of hungry sheep and lambs.  A large party of friendly, enthusiastic Sikhs were on their way down having conquered the first obstacle of their annual Three Peaks Challenge.  Race marshals were already manning their stations to open and shut gates and direct runners as they came through.
Inevitably, as we rose higher, the weather deteriorated. Wind increased, snow swept across the hill, then it hailed and the temperature dropped noticeably. Very noticeably! We’d maybe walked a little too fast to get to the top before the runners, so spent quite a lot of time hanging around before they came. A bit like in the Tour de Yorkshire.
Snow was around 10” deep in parts so a couple of younger generation girls passed the time building a snowman. Older people took cover behind a wall, rubbed their hands and stamped their feet.
Marshals in all their winter gear gazed expectantly for race leaders emerging from fast moving snow showers to materialise on the summit.   Eventually, they came.
Salomon runner Ricky Lightfoot was in the lead, just, from another Salomon runner from Switzerland competing for the first time. In shorts and vest I reckoned Lightfoot was a little under dressed for the conditions.  He’d no doubt be carrying full body cover, in accordance with the rules, but maybe felt he couldn’t waste time putting them on with such a slender lead. After winning the previous two Peaks races there was a £500 bonus on offer if he could make it three in a row.
First lady to pass the summit was our own Victoria Wilkinson, English fell running champion and former British champion. I say ‘our own’ because she once lived next door but one to my wonderful partner and we’ve watched her grow up from school days into the very impressive runner she is today.
Just behind her was a real threat in the form of Mira Rai, a Nepalese runner from the Salomon team who’d been first female finisher and set records in many long distance races and Sky Running Championships. She’d feel at home, we thought, in the snow and icy conditions of the past few days.

Once again frozen to the marrow we began our descent – running - long before the 800 runners had snaked over the summit, passing many concerned looking back markers on our way down. Around a hundred failed to finish, many being timed out at various check points, others finding it all too much.

Arriving back to the Start/Finish area we had lunch and a hot drink in the car while sheltering from the freezing rain that began to fall. We didn’t envy the scantily clad runners who’d be slipping and sliding over icy Ingleborough as we sat snug.  At around 1.15pm we strode across to the finishing funnel to cheer in the winners.

First into the field was the newcomer, Swiss dentist Marc Lauenstein, in a time of 2:48:58 – just ahead of his Salomon team mate Ricky Lightfoot who missed out on that £500 bonus by a mere 10 seconds. It’s unusual for a first timer to win the Peaks race for local knowledge is all important, but orienteer Marc played cat and mouse with those who clearly did know the best lines and outran them at the finish. Another Salomon runner, Tom Owens finished third in 2:52:14
Victoria Wilkinson came storming into the field way ahead of Mira Rai to win the ladies race in an impressive 3:26:14 and 35th overall of the 703 finishers. A great result for our local lass. 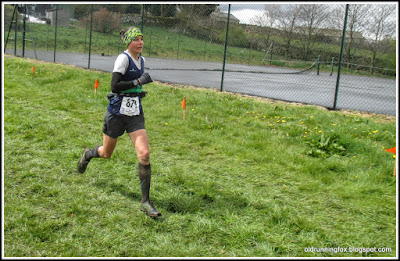 FV40 Helen Berry in the yellow vest of Holmfirth Harriers filled third place behind Mira in 3:37:20.
All in all it had been a wonderful day when nostalgia overflowed. Memories came flooding back, as I wandered round the Sports field, seeing familiar faces, hearing old voices, looking across to that sleeping giant of a mountain dominating the eastern skyline, the first brutal climb of that challenging trio around the 24 mile circuit of the Three Peaks Race. It was always my favourite race.
What moved me most was one of the trophies on display, the Clayton-le-Moors Rose Bowl, which has my name engraved on it three times for the years I won it.  Now, a few days away from my 84th birthday, I find it hard to believe I could have run such races over demanding terrain - in my 60's - but the proof is there on that rose bowl.
We returned home with faces glowing and wind burnt after the icy blasts around the summit. It was a good time to celebrate 'things' past' and what better way to do it than a meal at our renowned village pub, the Clarendon. My wonderful partner chose local trout whilst I opted for pheasant. I wasn't expecting getting a whole one, but that's what it seemed like. Both choices were absolutely wonderful - but neither of us could manage a pudding.
I rated the Peaks day 10/10 - and may there be many more of them.
They can keep the Tour de Yorkshire....