Yay, I'm back running again and delighted to say it felt like I'd never been away. I'd imagined I'd be panting for breath after the first ¼ mile but all went well.
Mind you, it was only a 4 mile jaunt along the riverbank to Burnsall and back on Saturday morning, with a few photo stops along the way, but I came home feeling really proud of myself.
Old Runningfox (85 on 6th May) is back in action.
Actually, with all the Easter tourists, it had been a bit of an obstacle course and I inwardly cursed a lady walking one side of the path with her dog trotting along the other side.
I hadn't seen the thin extension lead joining the two!
Later, a bull terrier type dog took a fancy to my calf muscle. I felt its teeth and warm breath and dearly wished it too had been on some sort of lead for it took a while to return to its shouting owner.
A duck race took place in the ghyll on Saturday afternoon and drew quite a large crowd of mainly visitors who, I believe, went home with 5 of the 6 prizes.
£255.00 was raised for charity.
On Easter Monday, we ran another 4miles+ on a pre-breakfast run around Grimwith reservoir.
There was a slight drizzle when we set off, the thermometer read 39ºF and a cooling breeze from the NE made for ideal running conditions. For me...
Pewits were wheeling and diving around us, making their joyful sounds, and a redshank was calling over on the moor to our left.
A few Canada geese had returned to their old nesting sites having been missing for a couple of years.  They're handsome birds though not very well liked in our area.
It was another very enjoyable run that worked up a good appetite for the steaming bowls of porridge, toast and coffee and hour later.
As we ate, goldfinches were breakfasting too on sunflower hearts and nyjer seeds outside our window.
And we have tadpoles.  Shortly after the new pond had been filled with rainwater and various plants a small batch of frogspawn was brought from up the ghyll and plunged into its depths.  The little black dots have hatched, grown tails and are now swimming about in the sunlight.
Soon they'll be jumping around on the lawn
We like frogs, as did a favourite Scottish poet, Norman MacCaig, who wrote an evocative poem about them,
One of the Many Days. 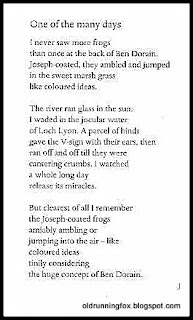 Must go, I still have to log those comeback miles - and add them to the 39,514 already run.
Where's it all going to end?
Posted by oldrunningfox. at 21:31