The 'Glorious 12th' usually finds us high on the moor smelling the heather, scattering the grouse and revelling in that purple phenomena whose season is far too short.
This year we were involved in a long commute from Almondbury to Keelham, on to Hebden then up the M6 to Penrith before finally settling into a luxurious flat a few metres from the eastern shore of Ullswater.
Friends had kindly granted us use of their flat for a four night break that enabled us to renew acquaintance with a couple of our favourite running routes and an invigorating walk around the hills across the lake.
The Hallin Fell circuit was always one of our favourites but with 159 years between us we weren't sure we could still run to its 1,273ft summit.
We set off with high hopes.
It was a dreich sort of morning with nary a ray of sunshine, a pattern of weather that continued throughout our stay in Cumbria.  It kept us cool.
We passed lots of grey Herdwick sheep and their black lambs on the long drag to St Peter's Church in the jaws of Martindale.
Herdwicks always appear to me to have been got at by a Bedlington Terrier somewhere back in their ancestry and that putting them back to a greyhound would produce the perfect machine for coursing blue mountain hares!
There were lots of cars parked by the Church but no-one was venturing up the slopes beyond.  We had the hill to ourselves - which was just as well for we find it a little embarrassing if folk catch us at those odd times when we're reduced to a walk.
I'm ashamed to admit there were a few of those occasions on Sunday's ascent, but I kept them short and concentrated on maintaining speed.  At least, I didn't stop!
There were a few rocky outcrops round the summit but most of our running was on delightful springy turf, the sort that gives you the feeling you can run forever.  Especially downhill.
Ullswater seemed a long way below as we set off down a traversing path that took us all the way to the landing stage at Howtown.
The ferries 'Lady of the Lake' and 'Raven' regularly discharge tourist hoards to wander the hills, picnic by the lake or avail themselves of  Howtown Hotel's hospitality before returning by a later ferry.
From the landing stage we'd a choice of returning to base by a mile of roadwork or cutting uphill through fields to a quieter trail beyond.  We didn't fancy any more uphill work so we chose the easier option.
The hardest part of next day's run was finding somewhere to park among all the tourist traffic at Pooley Bridge.  It had rained heavily all night, keeping me awake, so I was a zombie at breakfast.  But after four strong coffees I was ready to run.  Sort of.
We set off by the River Eamont en route for a circuit of Dalemain estate and Dacre Village.  Dalemain is open for the public to wander round it's gardens, buy plants, browse the gift shop, drink morning coffee or afternoon tea, inside or outside on the terrace.
We don't do any of those things.  On a previous visit we'd been delighted to see red squirrels rummaging around the feeders.  This time the feeders were all empty and there wasn't a furry coffee pot in sight.
It was getting towards the end of the rutting season for deer the last time we were there and a rampant stag had learned how to trap hinds in a tight corner between wall and buildings.  A cervid rapist.
We pressed on, down a long track to the little village of Dacre, passing the 14th century castle on our way to say hello to the four stone bears in the grounds of St Andrew's Church.
Viscount (William) Whitelaw, a former Conservative Home Secretary, occupies a plot in the churchyard and the Norman design Church has associations with Lady Anne Clifford, a baroness and former High Sheriff of Westmorland.
After paying our respects we hot footed it back to Pooley Bridge, steeply up tarmac then across fields to the wooded Dunmallard Hill, once the site of an Iron Age hill fort.  We were anxious to get back before our parking ticket expired!  We made it with 20 minutes to spare.
A little later I strolled down to the lake for some phone reception, mainly to sync the day's run to my phone.  A pair of greylags flew south chatting to each other, probably about the storm clouds ahead. All done, I stepped back inside as the heavens opened.  Wasn't I the lucky one?
The next day was a walking day.  I'd suggested we have a gentle stroll round the waterfalls at Aira Force and maybe out to the viewpoint under Gowbarrow Fell.  Things got a bit out of hand.
"Where on earth are you taking me?" I inquired of my wonderful partner as we headed north at a great rate of knots.  The falls, the money log and ancient woodland were all long behind us and I didn't have a clue where we were or where we were heading.
"Shouldn't we be heading uphill onto Gowbarrow?" I asked as we circumnavigated round the north of that said hill, past Todgill.
"The uphill bit comes towards the end" I was told.
Oh, that's wonderful I thought, considering we'd climbed what felt like a thousand feet already.  Worst of all, a great deal of it was on tarmac. Who on earth would devise a country walk with so much tarmac? 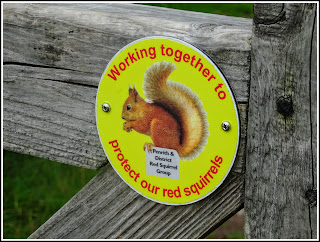 After 5 miles or so we turned right along a lovely running trail.  Except we were walking and walking is boring.  There was a crag to our right  and a vast forest ahead of us.  A wee plaque led us to believe there were red squirrels around but we didn't see any.  There was also a light smurring of rain.

Beyond the forest were patches of heather that bumble bees had discovered and were eagerly feeding.  Ullswater came back into view and a signpost said it was only 1½ miles to Aira Force.  It lied.
A couple with two children stood atop Yew Crag gazing into the gloom.  We joined them, trying to focus our eyes across the lake to Hallin Fell with its tall cairn.  Gradually it came into view.
We continued down through the rain passing a pair of guys on their way up, one of them dark tanned and shirtless.  "Ey up, 'ere comes bladdy Tarzan" I said, making sure he heard.  He only laughed.
Thank goodness.
The trail became rockier as we descended, once again making me wish we were running, going faster.  A fenced off cairn afforded a great view down the lake towards Patterdale with misty hills beyond. It was the view that will remain in my mind the most.  After leaving there it was all downhill to Aira Force - with its hundreds of double parked cars and heaving summer hoards.
Good luck to you all, I thought.
Let me get home.
Posted by oldrunningfox. at 21:00