After the worst wild camp we'd ever experienced at Loch na Keal on the Isle of Mull we decided it
was time to move to somewhere more amenable. Horrendous gales blowing from the freezing north, lashing rain and deafening noise had buffetted us all night long, so much so it was impossible to hear each other speak. The tent leapt up and down like some wild pernicious demon hellbent on dragging pegs from the ground and hurtling off into watery space. Come daylight we decided enough was enough. In a period of relative calm we struck camp, piled everything into the car, drove to Fionnphort then hauled our sacks onto the MV Loch Buie, a ferry bound for the beautiful Isle of Iona.
We were making for the island's only official campsite at Cnoc Oran on the Machair road where we hoped to find a spot sheltered from the wind and quickly put up the tent to dry out; where we'd have the luxury of proper loos, so no need for tramping off into the bog (excuse the pun) wearing full waterproofs, clutching a handful of toilet paper and seeking a convenient hollow well away from prying eyes - away from those eagle spotters with their long telescopes; where we'd be able to wash our hands, or anything else, in wonderful hot water rather than in a cold, rushing river. And all for £6.50 per night - each. However, after recent storms we found much of the site oozing water, including the secluded corner we'd planned on using, but we soon settled in and our tent dried in no time at all. Night fell, the wind bated a little and one of the island's many corncrakes rasped away in the darkness appearing, a bit like me, to have a sleep problem.
We had mornings of glorious sunshine, though the wind was still from the north and blowing cold.
Wild geese honked noisily across the sky, skylarks sang their matins while swallows engaged in swift, low level flights in search of sustenance. Starlings were the most common birds, nesting under the eaves of most houses, in our camp toilet block and, most of all, in the confined cloisters of the Abbey where hungry fledglings kept up continuous tweetings. Occasionally, when the sun shone brightest, a cuckoo called from some vantage point across the island. It was a wonderful atmosphere, perfect for running, and we soon worked out a very pleasant route, out towards Clachanach, down by the Abbey, through summery corncrake fields, then back by dazzling white sands at Martyrs Bay and up the Machair road to Cnoc Oran.
The Pentecost service in the Abbey on May 19th was a little disappointing. The Iona Community website promised something extra special for their 10.30am service to mark the 1,450th anniversary of Columba's arrival on the island in AD 563. It was also the 75th anniversary of the founding of the Iona Community in 1938. The Mull Gaelic choir were to sing at this service, as were the children from Iona Primary School. In actual fact the powers that be couldn't get rid of the congregation quick enough from the morning Communion service to prepare the Abbey for all the specially invited guests at the 'special' service in the afternoon. I felt quite cheated. Perhaps if I'd told them I was a past resident of the island, way back in 1949, I might have been allowed in?
To conclude. Many years ago, more than I care to remember, I found a wonderful little pebble of Iona 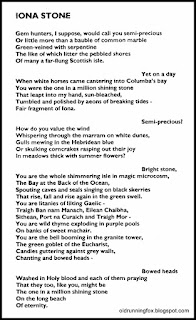 marble at Columba's Bay. Or it found me. I had a ring bolt put in it and wore it for years on a leather thong around my neck. Sadly I lost it, I suspect on a campsite at Arrochar, and have mourned it's loss ever since.  Each time I go to Iona I scour the length and breadth of Columba's Bay, searching for a similar stone, but can never find one. Last week we visited the select gallery of Val MacCormick who fashions wonderful pebble pendants using stones gathered from beaches close to where she lives and works, and where she advised us to go and look. We did but alas, found nothing resembling the striking green and white marble of the one I lost. Nor had Val anything like it in her collection - for which I'd have paid whatever price she asked. That tiny piece of Iona marble was one of my most treasured possessions.  My poem - Iona Stone - encapsulates all that it meant to me and paints a beautiful picture of the Sacred Isle. Enjoy.
Posted by oldrunningfox. at 19:22