We can't rely on the weather forecasts at all.  On Saturday we'd incessant rain which continued throughout the night and into Sunday morning.  There was a day when I wouldn't have bothered how much it poured.  When Munro bagging or marathon training they'd have had to chain me to the wall to keep me in.  Last weekend my favourite rocking chair held me in its clutches.
Until Sunday lunchtime.
My all singing/all dancing phone assured us the sluice gates would be closed and we'd have wall to wall sunshine throughout the afternoon.  We were daft enough to believe it.  At lunchtime we got changed and set off on a run to Linton to view the snowdrops.
It was nice when we set off but after a few minutes running a glance behind revealed heavy clouds advancing upon us which looked ominously full of snow.
If a herd of sheep over the wall could speak our language they'd probably have warned us we were right.  But we carried on.
Until then we'd been running on a hard track but things were a little different when we stepped through a gateway into a field.  Water and mud were above our shoes at times but we're fell runners so didn't let that bother us.
After a mile of saturated fields we passed through a tunnel into a tree lined lane full of glutinous mud that was impossible to avoid.  To add to our discomfort, water was dripping from the trees, as it was when we reached our destination.
The snowdrop garden.
Flowers weren't quite at their best and we maybe should have waited another week.  What's more, as we stood admiring them, it began to snow.  My all singing phone had got it wrong again.
Or the Met Office did.
We beat a hasty retreat from Linton with snow stinging uncovered flesh, mainly our ears, and I wished I was wearing the woolly hat I'd left on the table.
From hereon it was all road and tracks but the snow was blowing directly into our faces.  My wonderful partner forged ahead whilst I followed in her fleeting footsteps.  Remarkably, as we headed down to Linton Falls, snow stopped abruptly and bits of blue sky began to force the clouds apart.
We stopped on the bridge, deafened by the roaring torrent that flowed beneath us, and gazed in wonder at the whirling mass as it sped towards the sea.
As we ran the last half mile to the car park, the sky cleared and we could feel a little warmth in the sun again.  But it felt lovely to get home and step into a warm kitchen.   As we lie in bed on Sunday night it seemed wonderfully quiet compared to the hammering of rain on our bedroom window the previous night.   We slept in peace, blissfully unaware of what was happening beyond the curtains until, at 7.30 am, we awoke to find... 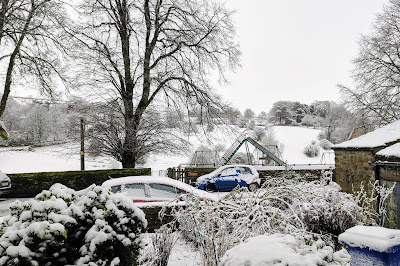 that slowly, silently and surreptitiously,
snow had arrived.