I should re-name this blog "The Occasional  Diary of an ex-runner.    I don't get out very much now, mainly because of failing eyesight, fear of falling and drooping energy levels.    Also because of deteriorating sight, it takes me ages to type, edit and correct what I have to say.  So not much blogging either.
Shortly after lockdown was eased we made the mistake of motoring to Hubberholme.  On a Sunday!   The world and his wife had turned out too so it was hard work driving along the narrow Dales roads.  We parked by the Norman Church, beloved of J.B.Priestley, and noted for Robert Thomson's trademark mouse carvings on the oak pews.
A cacophony of recently separated sheep and lambs  filled the air as we set off following the River Wharfe towards Yockenthwaite.     My wonderful partner, an avid botanist, was in search of a rare Butterfly Orchid that had been known to grow in the vicinity.
﻿﻿I'd got some distance ahead when I was shouted back.  From the air of excitement in her voice I suspected she'd found what she was looking for.  I was right.   Growing among the bedstraw, betony and rock roses was a perfect specimen.
I'd spotted a strange pillow of wild thyme I thought would be a wonderful place to rest my head while the botanist went in search of further specimens.  I declined, thinking it might be an ant-hill.   Besides, it was almost time to return and face the ever increasing number of cars and motor cycles on our way home through Buckden, Kettlewell and Conistone.
Some days later I did something that hadn't been possible for quite some time.  My podiatrist agreed to tackle my grossly overgrown toenails which. I said, might easily be used as crampons had I still been a snow and ice climber.  After a 15 minute soak she set about the onerous task using all her strength to cut through the thick growth that had accumulated over the last 6 months.  She did an excellent job.
I felt great afterwards and almost danced home.
﻿﻿Next day I tripped lightly down to a new barber's shop in the village, aptly called 'The Gent's Room' on account of it being the site of an old Gent's toilet!  Sticking my head round the door I enquired in true Yorkshire fashion
"How much is it for a pensioner?"
"£5" was his curt reply.
That'd do for me, especially as it appeared the most luxurious barber's shop I'd ever set foot inside.   He was an Asian fellow so we didn't have much conversation but he cut my hair exactly as I told him to.   He also cleaned out my hairy ears, trimmed  my eyebrows and sent me home smelling like a bunch of flowers.    The embarrassment I felt about his stated £5, and the time he spent tidying up my dishevelled head,  prompted  me to pay rather more! 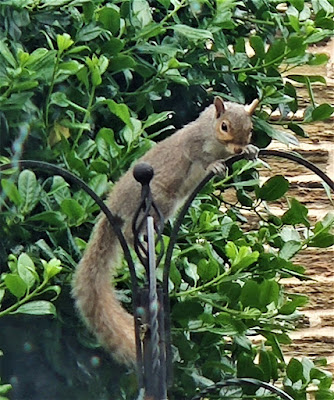 I'd a visitor when I got home, a grey squirrel which regularly comes to the bird feeders and tries to steal the nuts.  Not very successfully but he's a tenacious little beggar.
I've also seen him, or her, paying attention to the Niger seed feeder which seems to empty rather quickly nowadays.  Surely, he's not sucking seeds through those tiny holes?
Posted by oldrunningfox. at 17:36